The Shrine of St. Michael is at 113 Hope St. in Tarpon Springs

This is more info on the Shrine. For those that had gone to the Rhodes retreat,the icon comes from the same monastery in Panormiti ,Simi Greece where we had gone with Vassula.

(The same day, Saint Michael the Archangel gave me this message:)

daughter of the Most High, allow Me to tell God’s children that they should pursue Peace:

“who among you delights in Life? then come closer to the Holy One and never give Him up …. stand firmforever …. how blessed are those whose God is Yahweh! they are the heirs of His Kingdom!

“I tell you, friends of the Christ, today Christ is wearing sackcloth to manifest His grief …. for the sake of His Love, fast this Friday on bread and water to relieve His Heart; offer Christ this sacrifice;

“I have indeed called you here to honour the Most High and I, the archangel, Saint Michael, am mightily touched by your visit; My hands are in full battle and My arm is constantly raised to keep evil away …. pray to Me as you do and encourage others too to do the same; the Enemy of God weakens with this prayer; 1

“praise God and no one else; lift your heads to God and to no one else; love God with all your heart and soul; do not fall into temptations; ponder on all the good things you receive from the Most High and bless Him;

“and now come and visit Me again; I love you;”

see the slide show of the Shrine on the link below..

Goldie Parr, the current caretaker of the Shrine of Saint Michael Taxiarchis in Tarpon Springs, recalls the story of the antique icon of the Taxiarchis Michael, which was said to have been dug up more than 400 years ago on the island of Symi, Dodecanese Greece, by a farmer planting figs, pears and grapes on his property. It now resides at the shrine. 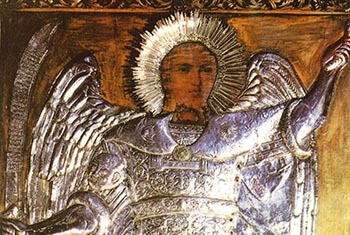