› Events and Activities › News › All News
What is Christmas?

Here we are talking about the salvation of mankind and of the Incarnation of Christ, the Son of God, who became the new Adam, assuming all that is human, and by this assumption saved and deified man. He came to reconcile us to the Father after the Fall. He became man in order to deliver us from death and corruption and make us the sons and daughters of God and gods by participation. So why did God become man which He was not before? It was to make man god. God desired this so much that Jesus came out of the bosom of the Father without separation, and descended and came to earth for that reason.

He did not come as a Judge to judge the world, not yet, but He came to save it after the Fall. So through the Incarnation of Christ, we, who are corruptible matter are able to partake His divinity and of His Kingdom if we observe His commandments and His Law. Thus the Word became flesh.

So let Christmas take its real place in our heart and out of respect for our priceless ransom let us love our Lord and Master who paid it. Let us welcome His love and we will know that if He had not wanted to save us after having redeemed us, He would not have descended on earth at all. He would not have been sacrificed because of us. But he did it by His own free will and because of the infinite Love He has for each one of us. But man has distorted the meaning of Christmas. This is what the Lord said once on the 24th December 1991, the eve of Christ’s birth…

“…today I come with peace-terms and a Message of Love, but the peace I am offering is blasphemed by the earth and the Love I am giving them is mocked and jeered in the Eve of My Birth; mankind is celebrating these days without My Holy Name; My Holy Name has been abolished and they take the day of My Birth as a great holiday of leisure, worshipping idols…I have warned the world…”

In this message Christ shows us how much He is offended by our indifference and by our deviating His Birth into trivial things, celebrating Christmas in the wrong way and without remembering the real reason. For many people celebrate much more the Christmas tree, and the exchange of gifts, and the food, eating until sick, going on holidays and amusing themselves to folly, instead of adoring Jesus as the first shepherds did in the manger.

The Lord says: “…Satan is deceiving the world once more with the same lie he deceived Eve… that they too can be God and are self-sufficient and do not need Me…” June 1, 2002

The world today, our Lord says, refuses the glory of God and prefers to live as if there is no God, for the world is paying no attention to God’s Law or precepts. The world refuses to give glory to God and instead glorifies itself, playing God.

Jesus said: “…they are doing all these things because they have never known either the Father or Myself…all they do is wither their soul for they snapped their navel string attached to Me and that nourished their soul…they are heading willingly into the eternal fires…” July 25/26, 1989

As you see from these messages, God is not pleased, especially when it comes to Christmas time when one should be living Christmas the right way and giving glory to God and remembering Jesus as our Savior who redeemed us. 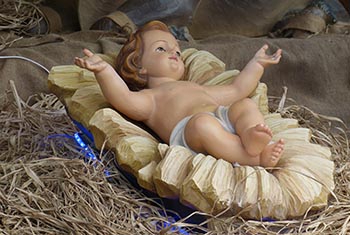