Author of “Antichrist and the End Times” to be Featured Presenter and Confessor at USA retreat
“See how My predictions come true?  And now I am telling you
that the Heavens soon shall deluge with My Coming upon you;
My Fire shall be hurled on this earth to burn up her crimes; I
will not restrain My Hand; My Holy Name is daily profaned and
My observances are scorned; this is to fulfill the words said in
Scripture.”
True Life In God messages, August 30, 1991

We all see examples of Godlessness throughout the world. We are all seeing  seen an intensification of evil on the world stage. 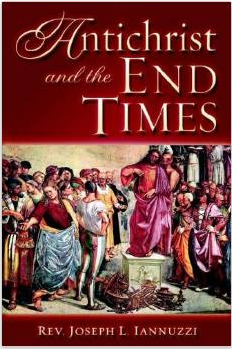 As Father Joseph Iannuzzi points out in his book, ‘Antichrist and the End Times’, “the evil nations that attempt to remove God from society discover their leadership in the Antichrist whom several Church Doctors identify as a diabolic, male individual.”   In addition, Fr. Iannuzzi, an Oblates of St Joseph’s priest, with a PhD in Sacred Theology, has been quoted as saying, “Time is Short.”

Fr. Iannuzzi is calling the faithful to arm themselves with prayer, penance and frequent reception of the sacraments.  He cautions that serious changes are about to take place in the world. This warning does not come as a surprise to TLIG supporters as we are witnesses to the truth that the world has turned its back on God.

This warning of a coming chastisement is well established in Fr. Iannuzzi’s aforementioned publication.  With depth in both research and thorough documentation, Fr. Iannuzzi takes up the issue of the Antichrist, citing as his sources: Scripture, Church Doctors, prominent theologians, writings of the Saints and private revelations that have been granted a bishop’s imprimatur.

Fr. Joseph recounts  his first encounter with Vassula and how he was instrumental in setting up the meeting for her and Pope John Paul II at the Vatican in November 1993.

Fr. Iannuzzi said, ” I reviewed a few of the messages from Jesus to Vassula in 1987 where he tells her He wants her to “put into the hands of his Johannes”, Pope John Paul II, his messages. and again in 1987 that Jesus would make his Johannes recognize her when she went to give him her messages. In 1993 this was accomplished in the “Sala delle Benedizioni” where I arranged a meeting of Vassula via phone. What inspired me to do this were her messages that had I been reading daily for a few years.

I arranged the meeting with Pope John Paul II and Vassula in 1993 in the “Sala delle Benedizioni’ (The Blessings Hall of the Pope). Vassula arrived at my doorstep with Fr. O’Carrol and her writings in 3 languages the day before the arranged meeting. The following morning I accompanied them to the Vatican, past the Swiss Guards and to the front of the line where the Pope would meet her. Toward the end of the procession in The Blessings Hall, the Pope stopped in front of Vassula, recognized her, and spoke to her in French. He blessed her mission and her, and she submitted directly in to his hands her messages. At this moment Jesus’ mission was accomplished and he never again asked her to submit her writings to the pope.

Vassula who brought her writings in English, Polish and French and placed them in the Pope’s hands thereby fulfilling Jesus’ request that he wants his ‘Peter’ to receive these messages.

It is really quite extraordinary that TLIG supporter, Father Joseph Iannuzzi, author of a number of thoroughly researched and well-documented publications will be participating in the  upcoming 2014 TLIG North American Retreat being held in St. Louis, Missouri from November 7th through the 9th

For this reason alone, it is necessary for our own spiritual enrichment, that we come together as believers to not only be blessed by Fr. Iannuzzi during the North American  Retreat, but also to experience first hand, this humble priest’s extensive knowledge regarding the great chastisement.  I do hope that you will seriously consider the incredible opportunity that is being offered to you at this upcoming retreat.  It is an occasion that will deepen our spiritual life and our ability to confront with faith and inner peace events on our horizon.