Having been one of four selected students to receive a grant from the Pontifical Biblicum University to study theology in the Holy Land, Fr. Joseph obtained a Doctorate in Sacred Theology magnum cum laude at the Gregorian Pontifical University on the writings of the Servant of God Luisa Piccarreta. The title of his doctoral dissertation is, “The Gift of Living in the Divine Will in the Writings of Luisa Piccarreta – An Inquiry into the Early Ecumenical Councils, and into Patristic, Scholastic and Contemporary Theology.”
He was the assistant to the famous exorcist of Rome, Don Gabriele Amorth, he has authored over 20 publications and has translated numerous works on mystical and dogmatic theology. Fr. Joseph is presently a peritus in the cause of beatification of several Christian mystics.

But, let us hear Fr. Joseph Iannuzzi speak for himself (see framed text):

My first exposure to the TLIG messages occurred around 1990 when my father, Leo J. Iannuzzi, a marine [US Marine Corps], police officer and fire chief, handed me a book containing the messages. It did not take long for me, yet a seminarian, to arrive at the conviction that God was speaking to my heart. Such conviction was borne, not from wits, but from the messages themselves that left me with a heightened sense of the unconditional love of God whose munificence wisely overshadowed my limited perception of him. Noteworthy was the manner by which He called me to enter the seminary, as it was the same manner by which the author of these messages spoke to my heart, not imposing or demanding, but freely and convincingly; the doctrine contained therein was no less impeccably simple than infectiously profound.

It is now 25 years [in 2016]   since I began reading the messages whose contents reveal one of the most loving and urgent appeals to the Church and to mankind at this pivotal juncture in its history in which many will witness the fulfilment of biblical prophesies. I invite you to meditate upon these messages.

The book “A Theological Review of the TRUE LIFE IN GOD Ecclesiastically Approved Prophetic Revelations” published in English in February 2019, and now available in French also, is the result of many years of research that Fr. Joseph Iannuzzi was able to carry out thanks to his in-depth knowledge of many files of causes of beatification and canonization. From this exceptional position, his research allowed him to establish an impressive parallel between the work True Life in God and the works of mystics such as Bl. Antonio Rosmini, the Servant of God, Luisa Piccarreta, and St. Faustina Kowalska; works which all received the official ecclesiastical seals of approval, the Nihil Obstat and the Imprimatur, but which had all been the subject, at a given moment, of warnings or even prohibitions.

During the writing of his book, Fr. Joseph Iannuzzi suffered a harassing campaign as a result of his position in defending the work True Life in God against false allegations.
However, the Father General of the Oblates of Saint Joseph intervened in favour of Fr. Iannuzzi, certifying that he enjoys the full support of his Congregation. (See framed text):

Dear Fr. Joseph, Greetings and peace to you during this Lenten Season. I hope that you are well and the same for your father. It is good that you are there with him and I am happy to have been able to give you permission to say there with him in his time of need. It has come to my attention that claims have been made against you and in particular that you do not have permission from me in your current situation. This, of course, is not true. You are in good standing with the Congregation and in regular contact with the General Curia and for this I am also grateful.

Please be assured of my prayers for you and also for your father.

May God bless you and St. Joseph watch over you.

In his book “A Theological Review of the TRUE LIFE IN GOD Ecclesiastically Approved Prophetic Revelations”, Fr. Joseph Iannuzzi resolutely addresses all objections to this work, carefully comparing them with other contemporary works.
As insidious as these objections may be, he analyses them objectively without avoiding any of them, and finely dissects the intellectual mechanisms that led to them.

Throughout His earthly life, Jesus was constantly judged by appearances. This was necessary in order to obtain the adhesion of hearts alone, without motivation of any temporal interest. Throughout the Gospels, Jesus even multiplied the negative appearances upon His own subject:  “Is this not Jesus, the son of Joseph? How can he now say, ‘I came down from heaven’?” (cf. Mark 6:3; Luke 4:22; John 6:42). “This fellow is blaspheming! Who can forgive sins but God alone?” (cf. Mark 2:6-7;Luke 5:21) “He said, ‘I am the Son of God.’!” (Matt 27:43) «“Pilate asked him, ‘Aren’t you going to answer?’ But Jesus still made no reply.” (cf. Mark 15:4-5). In this regard, many more quotations from the Gospels could be added.

Indeed, it is very striking to note, throughout all the work True Life in God and by the very choice of Vassula Rydén, how much Heaven seems to have intentionally introduced such negative appearances capable of blinding superficial minds. This remarkable fact, which strangely recalls the Gospel itself, should be considered ipso facto as a true sign of the authenticity of the work True Life in God.

Fr. Prospero Grech analyzed the whole work True Life in God, and one of the first things he did was to meet Vassula personally on several occasions – something none of Vassula’s opponents  ever did!

In parallel, the Vatican also invited the Bishops’ Conferences of all the countries of the world to express themselves about Vassula and her work True Life in God.  Five countries responded to the Vatican’s call: France, Switzerland, Canada, Uruguay and the Philippines.

On 4 April 2002, based on these five responses, the Vatican Congregation for the Doctrine of the Faith wrote to Vassula, asking her five questions. On 26 June 2002, Vassula replied in writing to each one of the five questions put to her by the Vatican.

The Vatican Congregation for the Doctrine of the Faith then studied the work True Life in God at length for two years in the light of Vassula’s responses.

On July 10, 2004, Cardinal Ratzinger wrote to the Conferences of the Bishops of France, Switzerland, Canada, Uruguay and the Philippines to inform them that after the Notification…

“…a thorough dialogue followed. At conclusion of this dialogue, a letter of Mrs. Rydén dated April 4th 2002 was subsequently published in the latest volume of “True Life in God”, in which Mrs. Rydén supplies useful clarifications regarding her marital situation, as well as some difficulties which in the aforesaid Notification were suggested towards her writings and her participation in the sacraments “

The satisfaction expressed by Cardinal Ratzinger means that no theological error was found in Vassula’s work True Life in God and that there is therefore no obstacle to reading this work. This acknowledgement by Cardinal Ratzinger, Prefect of the Vatican Congregation for the Doctrine of the Faith, indicating that there is no obstacle to reading this work constitutes de facto, by definition, a verbal Nihil Obstat.

In addition, Cardinal Ratzinger asked Vassula that the Dialogue, that is to say the Vatican’s five questions  and  Vassula’s answers should henceforth be printed in all editions of True Life in God, which has been done. This authorization to print the work True Life in God together with the Dialogue with the Congregation for the Doctrine of the Faith constituted de facto from Cardinal Ratzinger, Prefect of this Congregation: a verbal imprimatur, by definition as well.

The Nihil Obstat granted by Cardinal Ratzinger, Prefect of the Congregation for the Doctrine of the Faith, was formally confirmed one year later, on November 28, 2005, by Bishop Felix Toppo, bishop who has personally studied and read True Life in God several times from the original manuscript in English.
At that time, Bishop Felix Toppo was the bishop of the great diocese of Jamshedpur, the capital of Jharkhand State in India, where Christians are a minority. Bishop Toppo was then responsible for tens of thousands of Catholic faithful, including 170 priests and 470 nuns and religious. In such conditions, for Catholic clergy, high theological competence is essential. This is the case with Bishop Felix Toppo, who, in addition to being a bishop, is also a theologian and is Censor Librorum (i.e censor of publications), that is, he is officially entitled to deliver the Nihil Obstat in the name of the Roman Catholic Church. Meanwhile, on June 24, 2018, Bishop Felix Toppo was appointed Archbishop of Ranchi, an appointment that could never have been considered had the Vatican had any disciplinary grievance against him.

The Imprimatur granted by Cardinal Ratzinger, Prefect of the Congregation for the Doctrine of the Faith, was formally confirmed on November 28, 2005 by Archbishop Ramon Cabrera Argüelles, of the Archdiocese of Lipa, Philippines, who also studied at length the work True Life in God in the original in English. 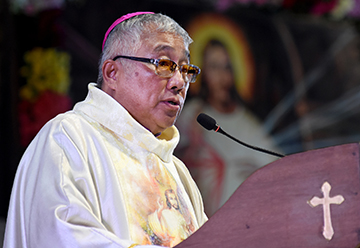 Before recently retiring, Bishop Ramon Argüelles was the Archbishop of a large archdiocese of more than two million Catholic faithful, including 230 priests and 460 nuns and religious.  At the time he discovered and read in English the work True Life in God, he was (since August 25, 1995), the Military Bishop, i.e. the general chaplain of all the armed forces of the Philippines.  He was the head of all the military chaplains of the army, the navy, the air force and the gendarmerie, which requires, in a country victim of Islamic terrorism, a strong character. As a man of high spirituality,  he has his feet well on the ground.

As True Life in God has been granted the Nihil Obstat and Imprimatur in the name of the Roman Catholic Church, it means that this work is declared free from theological error by the Catholic Church, and this statement is authoritative for the whole world. This is what Fr. Joseph Iannuzzi brilliantly sheds light on and demonstrates, with documents of the Magisterium in support, in his book “A Theological Review of the TRUE LIFE IN GOD Ecclesiastically Approved Prophetic Revelations”.

Fr. Joseph Iannuzzi also mentions the internal circular addressed on 25 January 2007 to the Presidents of Bishops Conferences, by Cardinal William Levada, who was appointed Prefect of the Congregation for the Doctrine of the Faith after his predecessor Cardinal Ratzinger had been elected Pope Benedict XVI. In this internal circular, Cardinal Levada officially recognized the new situation: “Mrs Vassula Rydén, however, after dialogue with the Congregation for the Doctrine of the Faith, has offered clarifications on some problematic points in her writings and on the nature of her messages”.

Better yet, it is now legitimate to encourage people to read it! And, according to the Code of Canon Law, Can 827 – §4, it can even be sold in churches!

Therefore, the one who would now dissuade anyone from reading Vassula’s work, True Life in God, is directly referred to by this word of Jesus in the Gospel:

“Woe to you experts in the law, because you have taken away the key to knowledge.
You yourselves have not entered, and you have hindered those who were entering.” (Luke 11 :52)