We have also to announce the death of Mgr Rene Laurentin whose 100th birthday was due next month. Fr Laurentin was a long time supporter and defender of Vassula and he attended all of the TLIG pilgrimages although he was not able to attend the pilgrimage in Rssia.  He died on the last day of the pilgrimage.

Here is a Picture of Mgr Laurentin taken on the last pilgrimage he joined us for in 2015 Rome.  He was 98 years old at the time. 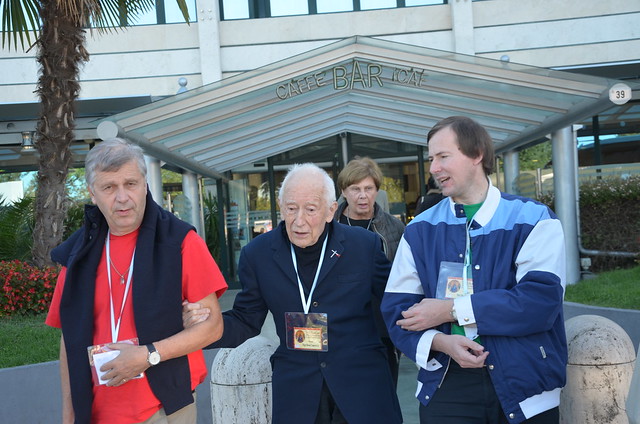 In Rome here is what was written in the pilgrimage report about him.

“When it came to Mgr. René Laurentin’s turn to introduce himself, there was a sudden louder uproar of acclamation, thundering the assembly hall with cheers, with a standing ovation for him. Mgr. Laurentin could hardly finish introducing himself. It was not only because Mgr. Laurentin was the eldest of all the pilgrims, just over 98 years of age, totally blind and barely walking, but also because he has been heroically defending the Messages of True Life in God. He was (and is still) a staunch defender of Vassula’s apostolic mission. He has never missed any of our Pilgrimages, not one.  When everybody again was seated, Vassula read out to us the so awaited Message of Christ and what He had to tell us in this significant gathering. And as I said above, it was again a clear and decisive Message that Christ was once again inviting his shepherds to reconcile and unite by showing a visible sign of Unity around one Altar.”

Here are some of the articles and interviews Fr. Laurentin has on the TLIG website.Just click on the title of each. You can find more using the TLIG website search function.

Testimony of Fr. René Laurentin on Vassula Fr. René Laurentin is well known for his promotion of Medjugorje and for his investigations into the widespread apparitions of Our Lady throughout the world in recent years. He has written many definitive works on Church life, the Second Vatican Council and Marian theology. The following is taken from ‘When God gives a Sign’ a response to objections made against Vassula and published in 1993 by Trinitas in the United States .

Fr Laurentin’s Talk on The Trinity Given in the Holy land 2000 Pilgrimage.

“This brings us closer to Vassula who is living a close, direct and personal contact with the three persons of the Trinity and makes us love them. I find it daunting to speak about them in her presence, because she knows them better than I, intuitively, personally, but mystics like true theology, that on which the coherence of the mysteries is founded. Madame R, who passed away last January 14, and to whom I had introduced Vassula, was also living in the Trinity. She had read my book on the Trinity and was happy to find, in the language of the Scripture, what she was feeling and living directly.”