The following is an extract from a meeting between Fr. Rene Laurentin and Vassula in 1989.

Fr Laurentin: …….it is not even your handwriting anymore: it is somebody else’s. And even though it is your hand, a graphologist wouldn’t dare to say it is the same person.

Vassula: Yes, but Jesus has told me and clearly shown me that this handwriting is not automatic writing, as some people imagine. One day He told me, “Today you will write My message with your handwriting, so that those who have not truly understood this grace that I am granting to you can understand, realizing that I have also given you the grace to hear My voice. Allow me today to dictate only. You listen and write.”

Fr Laurentin: At this point Vassula showed me her notebook where the handwriting changes for the message that follows. Her own, small, sensitive writing begins:

‘Vassula, the days are now counted.’

This message continues then in the normal handwriting of Vassula for two pages and then concludes with the words:

‘This is for all those who think that your hand is moved by Me without your hearing or understanding that it is I, the Lord, who inspires you. Now let us continue in the way I like, My Vassula.’

Then the large handwriting reappears:

‘Receive My Peace, be alert.’

No, Vassula is not in a robot-like mechanical dependence. She is inspired, not manipulated. She expresses herself with a perfect spontaneity. She is free, calm, and joyful. It is more of a receptivity than a dependence. There is no sort of constraint; rather there is the receptivity of love. I asked her to clarify the matter.

But in the case of these messages, is it your hand that moves, or rather is it dictated to your hearing?

Vassula: It is dictated.

Fr Laurentin: But you said that your hand was moved in some way.

Vassula: Yes, it is simultaneous. At first, He guided my hand without dictating, One day He said to me: ‘I would like you to learn to listen to My voice, the interior voice.’ And in just six weeks I learned to hear His voice. It is dictated word by word; and at times there are words that I don’t even know. I have to look them up in the dictionary.

Fr Laurentin: Even in English, there are some words that puzzle you?

Vassula: Yes, there are some words that I don’t know. At other times, He gives me a paragraph all at once, and I have to hurry to write it before I forget. But if I do forget, He reminds me of the word that I skipped. One day, He invited me to go to confession. I was against that. I wanted to erase the sentence I had begun, but He blocked my hand. It was as if the pencil had gotten stuck in a hole. Then I pushed with the other hand that felt more free. Then the pencil just twisted in my hand, flew to one side, and my hand was flung back.

Fr Laurentin: The difference in handwriting is apparent. When Vassula writes in dictation, the handwriting is large, with very tall letters. When she writes something of her own to comment or make some point, it is her own small, delicate, sensitive handwriting. Besides this, Vassula writes things twice. The first time she writes rapidly: then she eliminates whatever is personal, and rewrites the remainder in a more careful way.

Vassula: When I rewrite it, He corrects me.

Fr Laurentin: But among the words, you sometimes draw hearts, lots of hearts.

Vassula: That is the symbol of the Sacred Heart.

Fr Laurentin: And is that also imposed on your hand?

Vassula: Yes. At other times I draw a fish. (A symbol of Christ.)

Fr Laurentin: You were just saying that God is both transcendent and near, adorable and intimate. How do you reconcile this familiarity with adoration?

Vassula: At first, I used to write sitting down. Now I write while kneeling in front of a little table in my room with a dozen icons. At first I didn’t kneel down, when I understood truly the message, I also realized the greatness of Christ. He said to me: ‘Vassula, don’t I deserve more than that?’ Since then, I always remain kneeling.

Fr Laurentin: And how long does this last?

Vassula: Four or five hours, sometimes six: four in the morning and two in the afternoon. 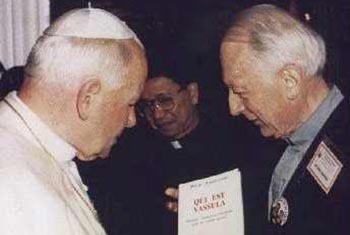