› Events and Activities › "Spread the Messages"!
Vassula speaks about Witnessing

As Saint Paul said to the Corinthians to remind them that it is God’s plan, I have taken his own words to address them to you: “We are only the earthenware jars that hold this treasure, to make it clear that such an overwhelming power comes from God and not from us.” We are therefore gathered here, we, who have become carriers of His divine Message to listen to what the Spirit wants from us. Therefore let us allow the Holy Spirit to be our Guide and not us to be His guide, so as to perform marvels in the achievements God wants us to achieve. As you have read in the messages, God has entrusted my poor being with this divine treasure. So forgive me if I sometimes oppose certain opinions regarding any work in TLIG; yet, I do not make a move without the Spirit urging me to do so.

From what we gathered during our last pilgrimage in the Holy Land, was that we sensed that prayers were more powerful than our speeches and dialogues because hardly did we open our mouths to pray together and our prayers were already heard and were answered. In any spiritual gathering therefore, we have to have a kenosis given to God from a total effacement to give the liberty to God to open our spiritual ear. If some have tendencies to become administrators rather than apostles I will ask them: what is more important for you, the letter, or the Spirit? If you say “the letter,” then you will work like an administrator when dealing with God’s affairs and you will not be justified nor will you ever achieve anything, because it will be like saying to the Spirit, “I am not a child any longer and I can walk by myself.” The letter thus will kill the Spirit and you will become truly administrators shifting papers only and leaving every meeting empty-hearted.

When today we will talk again of the apostolic work that Jesus Christ is asking us to do, I would like to remind you that our apostolic work must be aimed on the unity of the Church as well; therefore, the witnessing should be ecumenical. But to bring conversion in the hearts of the people one has to become the living example of Peace, Love and Unity. Back in 1998 in the Holy Land, I emphasised that many of you were “ripe” to become witnesses on the messages. I had said to you that Jesus was urging me to tell you that He needs apostles. Nothing much came as a response then. Jesus is patient.

Again, two years later, in the year 2000, Jesus urged me to remind you that apostles are needed. Our Lord has also said that if you say you have faith without evangelising, it is in vain. To evangelise is also an act of charity because you do it for the salvation of souls. To evangelise is to serve God and neighbour. To serve God, is also considered an act of charity, because you would be going out of your way for others. Even as you pray for others, this too is another form of charity, because to pray for someone is also like shedding your own blood for others. Do not be like those that draw life upon themselves so that they are the sole benefactors. As you all know, in summer last year (2001), I had prepared 27 questions as a test. When the answers were sent in, had they been correct, then all those who responded would have had a ready made speech in their hands. Then came the second test; that was the tape. I had to listen to 26 tapes; that meant 26 hours. Some were selected from these.

Then we needed organizers to invite the witnesses. I received quite a few offers, sufficient to be able to send the witnesses. But when the time came for action, it was extremely difficult to start the whole thing running. I went into a lot of agony and frustration. Since then some TLIG people have approached me, asking me to once again prepare a set of questions for a test, and I thought, “They have no idea what they are asking from me.” Some of the witnesses were still waiting to be invited, so what would be the use of having more witnesses when the response of the organizers was so weak? Upon seeing this, the Lord asked me to “turn the page” and from then on put my efforts into other things.

What I have said here does not concern those who really made every effort to organize and witness, but it concerns those who said “yes” to God, but did not keep their word. I have listened with enthusiasm to some CDs with background music that have been prepared as a means of evangelising. It is a very inspiring thought to do this, and the diffusion of CDs is easy.

I will conclude by saying, if you feel you are called to evangelise, then continue to do so. Not everyone is called for this particular work, and that was the reason I had you pass those tests. But to keep the witnesses busy, we need more organizers. The organizers’ work should be clarified.

When I call for organizers, they must understand that they should put all their efforts into producing a good, large meeting, so that the witness can reach as many people as possible. Organizers must also understand that the larger the audience, the easier it is to pay the expenses, and meet the costs involved to bring the witness. The organizers are free to let me know when they wish to stop being organizers. So far, the witnessing has been excellent and the attendance rather satisfactory. So I thank the Lord for all that He is doing. 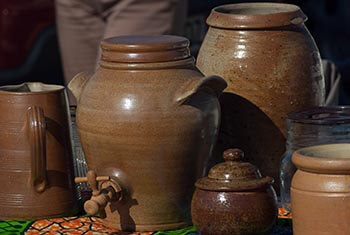