“May God bless her”
The following is an account of a private meeting with Pope John Paul II on February 14, 1998.

The Pope can be seen reading Vassula’s dedication, written on the first page of a volume of True Life in God messages.

Together with two friends, Anu and Abhay George, originating from Kerala in India, but presently living in Denmark, I, Niels Christian Hvidt, had the opportunity to participate in the mass of the Holy Father in his Private Chapel. It was the 10th of February 1998.

Ten priests were concelebrating with the Holy Father, and altogether we were a number of 23 lay-people present. After a very beautiful and austere mass the Holy Father received us in the Audience-Hall close to the Private Chapel, distributing Rosaries and blessing and greeting each of us. About five people had brought gifts to the Holy Father.

I had with me the 10th Volume of True Life in God in French. Some months before, Vassula had dedicated it to the Holy Father and given the book to me. Inside, on the first page it said:

To the Holy Father John Paul II.
May God bless you and protect you,
Vassula.

When he came to me, I had the book in my hand. Having received the Rosary and kissed his hand, I said in German: “I have brought a very important book for you. It is the book of Vassula.” The Holy Father, with interest replied “Ah! Vassula!” Also Mons. Stanislaw Dziwizs, for decades the personal Secretary of the Pope and three days before this audience appointed a bishop, with interest said: “Vassula!” Both clearly recognised her name.

I then went on to say: “She has dedicated it for you”. With sincere and warm interest the Pope looked at the book, opened it and saw Vassula’s greeting and then said “Gott segne sie”: “May God bless her”. He made the sign of the Cross over the book. Then he handed it on to Mons. Mietec, who collects the gifts, that the Holy Father may take a look at them after the audience.

Before he passed on to the next person of the group, I said to him: “We pray very much for you, Holy Father”, to which he replied “Thank you!”

The following quote of Pope John Paul II, given at a special general audience at Castelgandolfo, is taken from the Spanish language edition of L’Osservatore Romano, dated the 16th August 1996.
(This Apostolic blessing came, of course, 9 months after the Notification)

“I cordially salute the persons of the Spanish language present here, especially the religious of the Congregation of ‘Saint Teresa of Jesus’ and THE SPIRITUAL GROUPS OF ‘TRUE LIFE IN GOD’. I wish to all of them a spiritual summer which will help them to reaffirm their Christian promise so that their generous answer to God can be the witness to His love in the world. I give you, with affection and to your loved ones, the Apostolic blessing”

See a video of the above event HERE 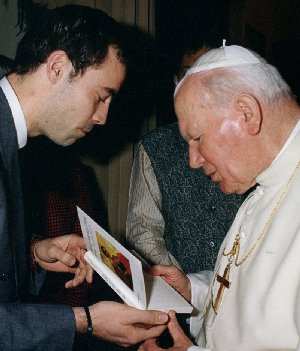