Father Petar Ljubicic is the priest to whom the Medjugorje visionary, Mirjana, will give the Secrets, ten days before they occur so that he announces them to the world.

Fr. Petar participated in the True Life in God ecumenical pilgrimage held in Rome on September 2011, where he agreed to give this interview.

Going on a pilgrimage to me means searching for God. More of less every pilgrimage helps a man in searching to find the Person of Jesus Christ. That is something I consider the most important thing in a man’s life. This pilgrimage is a great experience for me. We are here in the “Eternal City” with different people and different denominations, where we are trying to get to know each other to fulfill Jesus’ desire “That all be one!”

There are a few things that Jesus told us we have to do – of which one is to pray for a spiritual vocation, to pray for the power of the Holy Spirit! He Himself prayed for Unity. Because He was able to look into the future He knew, as He is God, that people will separate, they will go their different ways. So He prayed for Unity. And we are here to pray this, His prayer will be heard, which will lead us to the Unity fo all people, that all be One, to have One Shepherd as Jesus wanted.

Could you tell us how you first came into contact with Vassula and the True Life in God Messages?

I met Vassula for the first time in Switzerland when I was a missionary. We met together over dinner. I was a missionary from 1995 to 2000. I had already read several of the books by myself and was convinced that it was an authentic revelation. Reading these books we discover how the Person of Jesus Christ is the Person who should be our source of life, the goal of our life. One feels that Jesus is again here on earth. Jesus wants mankind to open his heart and accept Him, and allow Him to become man’s happiness and joy. Jesus is trying to help us to become happy here on earth, while, of course, promising us the heavenly happiness of paradise. That’s why for Him, as the Divine Savior, man’s disunity is so painful. If we fall in love with Jesus Christ, if we surrender ourselves to Him, then there is nothing better to do but work for unity, that we all become one. That is why this Message [True Life in God] is so essential, so important, and everybody should read it to open himself and accept it.

Often people who follow the Medjugorje Messages are opposed to the True Life in God Messages. Is it normal for you, can it be justified?

I think the main reason for it is that people don’t know the Messages and this is probably the reason they don’t understand them and oppose them – they haven’t read them.

Probably they hear the negativities from others?

People have heard that Rome – The Vatican – was against the Messages, so they are ‘a priori’ against the Messages. But everybody who reads these Messages and meditates on them would be able to see that there is nothing against the faith or the Church, they simply help a man to love the Church and to get to love Jesus and to live with Him.

Moving on to your responsibility of announcing the Medjugorje Secrets in advance, could you say a few words on this matter?

As far as the Secrets are concerned, if anybody is interested to know, I could say that Mirjana has received all ten Secrets and on behalf of all the Medjugorje visionaries, she will reveal them when the time comes. It is also confirmation that as the Secrets have been gifted to Mirjana, so each visionary will receive all ten Secrets. The first two Secrets are warnings for all those who believed in Medjugorje. When the Secrets are fulfilled all will know that the visionaries were telling the truth and that Our Lady was in Medjugorje. The Third Secret is the visible sign on Apparition Hill which will be a great joy for those who believed and who were living the Gospel and in accordance with the Messages which Our Lady gave in Medjugorje. Ten days before the Secrets all will know what is happening and the priest together with Mirjana will fast and pray. Then three days in advance it will be possible to declare it, ‘Urbi at orbi’.

She knows my phone number and it will not be a problem to get together. The first two Secrets and also the third one are connected to Medjugorje, so we will be obliged to be in Medjugorje for the fulfillment of these Secrets.

Are you anticipating that when the first three Secrets have been announced and fulfilled that the world, as a whole, will believe in the authenticity of Medjugorje?

I hope that it will help many people to settle their lives, to convert, to believe, and become new people. In any case, we all know – when Jesus came two thousand years ago, many miraculous signs occurred. And the Holy Mass itself is a miracle, a sign which is occurring every day. We see how difficult it is to turn people back to God, it is so difficult to convert people. I think and hope that when these signs and the Secrets are realized, that they will help everybody, at least to those who visited Medjugorje. Of course many people have hoped, prayed and lived according to the Holy Gospel although they have not visited Medjugorje yet. I hope it will be a final call to the people for conversion, to return to God and to start to rely on God.

Thank you, Fr Petar, for giving this interview!

Fr: thank you very much, God bless you, Jesus loves you! 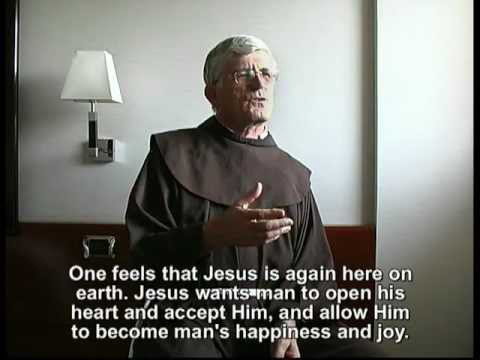