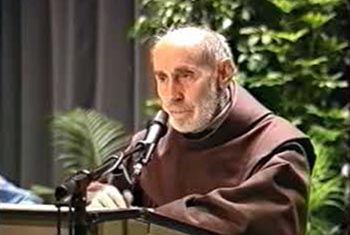 To: Mgr Joseph Ratzinger Prefect of the Congregation for the Doctrine of Faith

Allow me to come back to my previous letter to you, concerning Mrs Vassula Ryden because I am astonished and perplexed by the procedure adopted by the Sacred Congregation for the Doctrine of the Faith regarding this case.

Usually the Roman Curia, and especially your Sacred Congregation, treats these cases with a great deal of respect and kindness towards the persons brought to judgement, and in conformity with the demands of Code of Canon Law (especially articles 220 and 221) and we always remember the surprising patience and delicacy used with regard especially to Fr Schillebeeckx: and Fr Boff.

But with the present case, because of the disregard of Canon Law, is it certain that the Spirit of the Gospel has been respected? Was it really so urgent and was there such grave danger for faith and morals to set aside usual methods in reaching a judgement which resembles a condemnation on the faith, the communion with the Church and the Writings of Mrs Vassula Ryden, without having warned her beforehand (is it true that she learned of her condemnation through the press?) and without giving her the possibility of defending her cause, and without questioning the many Catholic priests who know her and especially her Spiritual Director, Fr O’Carroll?

Being an Exorcist Priest, I have many times encountered the enemy face to face, the real Anti-Christ and I have the painful habit of hearing from the mouth of this liar and rebel “Messages” which have no resemblance with what Mrs Vassula Ryden receives.

Being also a graphologist (with a diploma) I have been precisely in the “modalities” to which the Notification refers and I have closely studied Mrs Ryden’s handwriting in the messages, but they do not bear and are not in relation to the automatic handwriting or content of messages of spiritualists.

Mrs Ryden’s messages have a remarkable doctrinal rigour, agreement with the Bible and a spiritual loftiness which one never finds in spiritualists’ revelations.

Apart from the personality of Mrs Ryden, and of her Christian (Orthodox) and moral conduct which Fr O’Carroll can talk to you about and to keep strictly to the Messages which she receives from Christ Himself, allow me to submit my conclusions to you.

I leave aside deliberately the hypothesis of an ingenious and perverse trick, the content of the Messages is far beyond the personal possibility (theological and literary) of Mrs, Ryden.

In all unusual manifestations (mystical or pathological), three possibilities are open for discernment.

– this is to be totally discarded! Because the evil spirit cannot continuously imitate or mimic the voice of Christ. And the Dia-bolos would not risk to invite the divided Church to reconcile in Unity and under the primacy of “Peter” and far less to underline the vital importance of the Eucharist.

– to be in a paranormal state – but the study of “modalities” (Bible, setting etc.) escapes completely the phenomena of medium use or of trance. To be in a state of unconsciousness, this would suppose an unconsciousness that was of genus theologicai intuitions (which surpass the memory content of the receiver), a harmonious constant and flawless logic.

This has never been found in my logic. All the more that this unconscious state, far from turning back on itself, remains constantly open to a mysterious Being whose personality in no way reflects what we know about Mrs Ryden, but on the contrary resembles Christ and the Faith of the Church. Could the unconscious be capable of the duration of such an architectural construction of such great literary beauty and profound theological teaching?

There remains THE SUPERNATURAL ORIGIN. Logic imposes this conclusion (for many reasons which I cannot develop here) and, I add, it commits us. For if it is really a question of the Lord speaking to His Church, then we are not allowed to treat these Messages with contempt and indifference, satisfying ourselves with a quick and superficial reading and still less by our refusal for which we should have to answer.

These messages are not centred on the person of Vassula who is only the instrument and the messenger, but on the Mysterium Fidei and the Mysterium Ecclesiae. At the heart of the Message: the primacy of “Peter” which is in danger. And you know better than I do of the constant and dangerous increase of the challenge and the confusion which endangers the Body of the Church.

This word which comes from Above invites us insistently to reconciliation of the whole Church which is one in the heart of God, but is divided with and by the disciples of Christ. A gesture is asked for (so desired by Paul VI) to celebrate together, on the same day, the Pasch of the Lord. If we accomplish this small step, the Lord will do the rest.

Your Sacred Congregation thought that it had to take a position regarding these Messages! But there is one question to ask! We, the priests of the Catholic Church (and Bishops, numerous outside France), who have believed in these Messages and believe that they come from the mouth of the Lord, are we really in error?

And are we disobedient to the Church by believing in recognizing the voice of its Master and Pastor, Who invites us to conversion and to Unity in the Faith “so that men believe”?

Are we always in communion with the Church when we perceive in these Writings not a Call to the “Pan-Christian Community”, but an invitation to all the Church, divided in its members, to unite under the guidance of ‘Peter’?

Also, pardon my daring, would it not be necessary to name a commission to study in a serene and objective manner the writings (published and unpublished) of Mrs Ryden which would question her in all justice. Too many Christians are really troubled by the Notification of your Sacred Congregation which gives no precise motivation for its judgement which strikes deeply at their gospel sensitivity and wounds their faith in Christ Jesus whose voice they believe and always think they hear through these messages!

That is why, Your Eminence, who is my Father in Faith and my Brother in Christ, kneeling before the Cross of the Saviour who destroys the powers of hell and who saves us from the “Father of Lies”, I say to you: IT IS THE LORD! May we listen to Him!

As a son who is submissive to the Holy Church, my Mother, which alone possesses the Words of Eternal Life, but wounded in my heart before this decision which strikes at my faith in Christ and which I cannot understand.