His Eminence Cardinal Mar Nasrallah Peter Sfeir, the Maronite Patriarch of Antioch and all the East addresses TLIG Pilgrims

We welcome you to Lebanon. The ecumenical movement is dear to the Universal Church, and you know that the Catholic Church has tried its best to achieve unity among Christians. The Catholic Church has a special commission headed by a Cardinal, and this Cardinal is striving to contact all factions of the Christian faith to seek the path of unity. You know well that the Maronite Church is a Catholic Church and has no equivalence in Orthodoxy. Since it’s birth (the Maronite Church) was, and will stay, with God’s blessing
as it is. The Maronites are scattered all over the world, especially in the Western World.

I believe that some of you have met Maronites in various countries, whether in Brazil, Australia, Canada, the United States or Venezuela. We are longing like you for this unity wanted by our Lord Jesus Christ when he said, “be one as I and You my Father are one”. We know that Mrs. Vassula has come before to Lebanon and is seeking to achieve this unity. We know as well that she has presented her doctrine and thoughts to the Apostolic Chair who published some writings concerning this subject. We intend that our faith be one in Jesus Christ who is our Redeemer and Saviour. If there were disagreements that happened throughout history for whatever reasons and purposes, We ask God to forgive us all our offenses and to bring us back to unity. This unity is our testimony to those who do not believe in Christ, as any divisions among us cannot generate belief, which is exactly what Our Lord Jesus Christ already pointed out. We pray with you for the sake of this unity, may God fulfill it in the image and date he deems appropriate.

I ask God to open up the right paths for you and for us, so that we gain His approval, and so that we’re able to testify to the world a testimony of unity and not of divisions, as the world now is in dire need of this unity, especially that of the Christians. Thank you for coming to Lebanon. Lebanon is the land where Christians of all factions have gathered, and as you must know, there’s a total of 18 denominations. Yes, these denominations consist of 6 Catholic ones, 5 Orthodox ones, the rest being Muslim ones, as they also vary. As you know, Muslims are divided into Sunnite, Shiite, Druze and so forth. That is why Lebanon is considered the melting pot for all people. They know that they have to live with one another in mutual understanding, faith, and love, assisting each other with sincerity. We ask God to be with you, may He bless you and assist you in this endeavor toward the accomplishment of this Unity. Thank you. 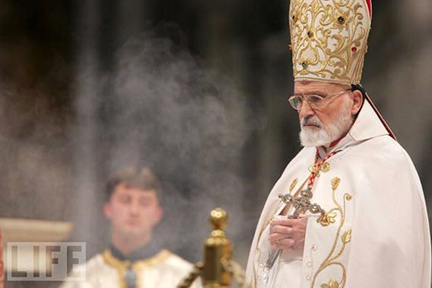