Cardinal Joseph Ratzinger, now Pope Benedict XVI Emeritus, then, Prefect to the Congregation for the Doctrine of Faith 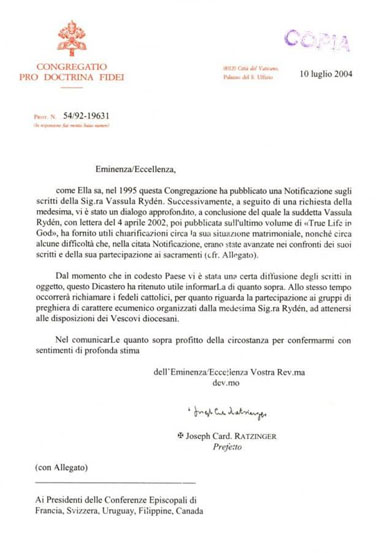 Vassula in a private meeting with Cardinal Ratzinger shortly before he became Pope. The meeting was the conclusion of the fruitful dialogue that took place

As you know, this Congregation published a Notification in 1995 on the writings of Mrs. Vassula Rydén. Afterwards, and at her request, a thorough dialogue followed. At the conclusion of this dialogue, a letter of Mrs. Rydén dated 4 April 2002 was subsequently published in the latest volume of “True Life in God”, in which Mrs. Rydén supplies useful clarifications regarding her marital situation, as well as some difficulties which in the aforesaid Notification were suggested towards her writings and her participation in the sacraments (cf. Attachment).

Since the aforementioned writings have enjoyed a certain diffusion in your country, this Congregation has deemed it useful to inform you of the above. Concerning the participation in the ecumenical prayer groups organised by Mrs. Rydén, the Catholic faithful should be called to follow the dispositions of the Diocesan Bishops.

In communicating to you the above, I use the occasion to assure you of my lasting and profound esteem.

To the Presidents of the Episcopal Conferences of
France, Switzerland, Uruguay, Philippines, Canada