Archbishop Emeritus of Split and Makarska and former President of the Episcopal Theological Commission of Yugoslavia, Split, Yugoslavia

The following introduction by Archbishop Franić was first published in 1993:

The Purity of the Integral Revelation of God

When I received two books written by the visionary Vassula Rydén, and translated into Croatian by Mrs. Marija-Dragica Vukić, I was pleasantly surprised, all the more because the translation was made from English in Belgrade, where Mrs. Vukić lives. She asked me to write a preface for the third book which will appear in Croatian. There are already five volumes in English entitled True Life in God written by Vassula Rydén. It is a great pleasure for me to write this preface.

The first news I heard about Vassula was two years ago, in 1991, in a Canadian Catholic review, L’Informateur Catholique. A great deal of that particular issue was devoted to Vassula. Thereafter, the review published information about her regularly. A good Catholic lady living in Canada, who is very interested in Medjugorje, a leader of frequent pilgrimages, directed strong criticism against Vassula, alleging that there were false theories in the messages which she is transmitting: for example, that Jesus calls Himself “Eternal Father” of men, as if He identifies Himself in every respect with the Father, thus denying the distinction between the Father and the Son. This devoted admirer of Our Lady is not happy either with the manner in which Jesus transmits His messages through Vassula’s hand; she thinks of this in terms of spiritualistic transmission of messages.

This critic of Vassula, about whom I read in the review I have mentioned, was Mrs. Darija Klanac, nee Skunca. I had the honor to meet her on her way as a pilgrimage leader from Canada to Medjugorje . She visited me in Split, in St. Peter’s Co-Cathedral, where I have lived since 1983. I spoke in French to the pilgrims about the Medjugorje messages of peace. Mrs. Klanac also talked with great zeal about Our Lady. I was very happy that Mrs. Klanac, one of our Croatians married in Canada, had such a high reputation among the Catholics of that country. Later on, when she had difficulties with the review I have mentioned because they supported Vassula, I noticed with what respect they wrote of her personality, that is, the experts working for them. This pleased me.

But I am on Vassula’s side, especially since I was given three books of her messages in Italian, entitled Peace and Love. A group of Italian pilgrims on their way to Medjugorje stopped in Split and visited St. Peter’s. They invited me to Italy. So, on September 23,1992, I celebrated Holy Mass in a large church in Como. The church was full and there I met Vassula. Before Mass she gave a testimony about her mystical experiences and messages, which, with the greatest conviction, she attributed to Jesus. I gave the homily on the Gospel of the day. I spoke about private revelations, and the importance they have for the Church and today’s world. I added some words of support for Vassula, leaving the final judgment to the Church. I always use this precaution when I talk publicly about the Medjugorje messages.

On the other hand, when I talk privately I express my constant conviction of the authenticity of the Medjugorje apparitions and messages; I rely on the Gospel test which says that a good tree may be recognized by good fruits. This is especially true of religious conversions, miracles in the moral order, and, most frequently, experiences in Medjugorje. This happens also through Vassula, who herself is a miracle, an object of wonder. True, she does not cause wonders in the physical sense, for she makes no claim to a charism of healing.

I was given a copy of the fourth book of Vassula’s messages by the translator personally. I was delighted to note that the preface was by Fr. Rene Laurentin, whom I value highly; I have met him many times in Split on his way to and from Medjugorje.

As I read Vassula’s books, my first impressions of her were very much confirmed. Her messages, actually for me Jesus’ messages, are alive and authentic. These messages can help us toward a better understanding of Jesus’ messages in the Gospel, and also help us experience them in a personal way. These must always remain the authentic criteria in judging private messages, in recognizing healthy mystical experience. There always have been, always will be, mystical experiences in the Church. These we must not minimize, but we must leave the final judgment to the church.

When I met Vassula in Como, on 23rd September, 1992, I had the feeling that she was under attack by many critics; they wrote disparagingly about her. This is understandable as through Vassula, Jesus is passing judgment on extremist theologians of our time, who distance themselves from divine revelations by too great proximity to the world. This, Pope Paul VI found out, a short time before he died; he began to speak of the “devil’s smoke” which had entered the Church and clouded fundamental truths of God’s revelation.

It seems to me the. more I understand these things, that Vassula’s main charism is to show the PURITY OF THE INTEGRAL REVELATION OF GOD. Nothing must be taken from, nothing added to the Revelation; there must be no yielding to the world and to the permissive civilization of our time, which penetrates even into the Church, causing disorder in her saving mission.

Inculturation is necessary as the basis of a new evangelization. So Pope John Paul II says, following the Council. We must respect cultures that we may plant in people of all nations God’s revealed truths, strengthening them with love, always with due regard to human, national and social rights, and attention to social situations. This is the truth; Second Vatican Council says it; so do Popes of the Council and after it. But there is the truth which tells us that Christ and His Word judge all cultures, all human, national and social rights. It is not, on the contrary, cultures which judge Christ, but Christ who judges them. Christ protects, promotes, dignifies, raises to a higher level, to God’s level, all cultures.

Because of that do not be afraid to “open the door to Christ”. He is our Creator, our Friend, He is our “Eternal Father” together with the Father and the Holy Spirit; He knows what we need to achieve our small earthly and great heavenly happiness.

The Church, together with the Pope, and under the Pope, as the visible head of the Church and the Vicar of Jesus Christ, transmits the saving teachings of Christ. That is what Jesus is telling us through Vassula, though she makes it clear that she is of the Greek Orthodox Church. In this way she shows the way to healthy ecumenism, ecumenism which, today, is passing through its Calvary. But ecumenism is God’s work, so it must pass through its Calvary like Christ Himself. May God protect us so that the Calvary does not spread over the whole world.

Ecumenism will, through its Calvary, have its resurrection. It seems that this is the core of all the messages that Jesus is giving us through Vassula Rydén, Greek Orthodox, living now in Switzerland.

Immediately after the Notification in 1995, the Archbishop wrote the following testimony:

Integrity of the truths revealed in the messages of Vassula Rydén, very faithful daughter of the ancient and Holy Greek Orthodox Church

In reading the books of the divine messages and knowing that the author, Mrs. Vassula Rydén, is a daughter of the Greek Orthodox Church, I was very impressed to find in them a fidelity, and I am firmly convinced, an absolute fidelity to all the revealed truths as taught and expounded by the Catholic Church.

I would like to humbly point out that in 1941 I received a Ph.D. from the Gregorian University, which was at that time very faithful to Thomist theology and philosophy and that I have myself taught this theology for 38 years, from 1942 until l980, at the Interdiocesan Theological School of advanced studies in Split. I have come to know about the various objections that were formulated by certain Catholic theologians concerning the messages of the books of “True Life in God”. But these objections are certainly not able to put in doubt my conviction that all these books contain authentic messages coming from Christ Himself, messages that include the truths concerning faith in the supernatural, truths in which both the ancient Byzantine Orthodox Church and the Roman Church believed, up until the painful moment of their separation. Consequently, the messages correspond well with the ancient faith of the Holy Greek Orthodox Church, which implies that Vassula does not have to formally abandon her belonging to the Orthodox Church in order to become Catholic.

I maintain this firm conviction even today, notwithstanding the “declaration” (notification) of the Congregation for the Doctrine of the Faith, published in the Osservatore Romano dated 23-24 October 1995.

Furthermore, I feel I must declare that in the messages of Vassula’s books one finds certain truths that are today in a state of crisis in our own Church. These truths are very clearly stated in these messages and asserted in a surprisingly firm and decisive way. Truths such as the Virginity and the Holy Motherhood of the Blessed and Immaculate Virgin Mary, the real presence of the Body and of the Blood with the Soul and the Divinity of Jesus Christ in the Eucharist.

According to my humble but firm conviction, there is no error and there have never been any errors, either in the first books of Vassula nor in those that followed. There is no error when Vassula speaks about Christ calling him Abba or Jahweh, neither when she says that Christ will come in the world to bring a period of His peace, because it has to do with the historical return of Christ into this world through His Church, who during that period of Peace will be renewed; and then, the presence of Christ will be even more visible to all mankind in this world, as the Holy Virgin and Queen of Prophets was saying at Fatima, and as she is still prophecying now in Medjugorje.

Therefore, I unite myself to all those Catholic bishops and theologians that defend the authenticity and sincere veracity of Vassula Rydén, seer and mystic, one of the greatest of our times. 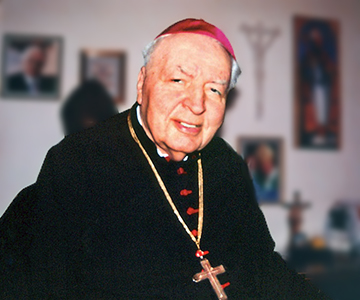