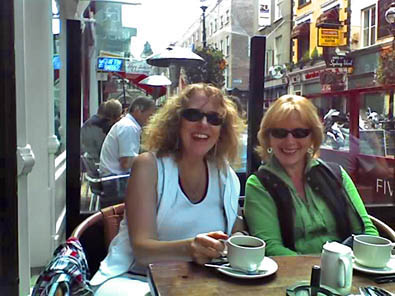 Having only just started a new post as Public Health Practitioner in the far flung region of Skye and Lochalsh in North West Scotland, I was just getting used to the fact that communicating with mobile phones was virtually impossible, when “ping”! I received a text message from Anne Marie Sands in Dublin.

I was surprised that I actually got the message. Usually, it is impossible due to the surrounding mountains which block any possible transmission. However, I had a smile on my face when I saw the content of the mail. The message was along the lines of, “Are you able to come over to Dublin towards the end of July to witness again for True Life in God. If so, can you let us know?” The smile, of course, was due to the fact that nothing is impossible to God and if it involved letting people know about this great Love Hymn from Heaven that He has given us, then something like sending a text message through mountains was not going to stop Him.

Of course, I was excited at the prospect of being invited back to Ireland and Dublin. I was there almost a year ago. The people who had come were very open. God clearly spoke to them through the messages of True Life in God.

Contact was made with Anne Marie, and a date was set for July 28, 2007. This allowed the organizers in Dublin to get cracking at the regular TLIG pace – fast.

I had the very good fortune of living with Vassula and of working for True life in God in Rome, Italy during the years of 2001-2002. Vassula used to say that Jesus’ pace is fast, and I certainly became familiar with this concept over a period of years. It seems that when a door is opened, we have to learn to move swiftly.

Traveling for five hours from Skye to Edinburgh airport and then to Dublin was the hard part. The flight itself was quick and on time. It was great to be back on Erin’s green shores with the fantastically warm welcome of the TLIG family in Ireland.

We started the evening catching up on what was happening in Ireland in relation to evangelizing, the Messages and the formation of prayer groups. We also spoke of “craic” (Irish loosely meaning “fun”)which all of us engaged in. Afterwards, en route to Anne Marie’s house, they showed me the large laminated posters and leaflets announcing the talk.

Anne Marie and the other organizers had done a great job, combining common sense with practicality and locally available resources. They had also secured a good venue for witnessing – the Dominican Convent at Muckross. One of the weekly TLIG prayer groups is held here.

The following morning, the last minute arrangements were taken care of by Anne Marie and Mary. Others involved in TLIG Ireland got to work in setting up book stalls, videos and necessary logistics.

When I lived with Vassula, I was with her when she felt inspired to create a test based on the theme and thrust of the Messages of True Life in God. She felt that there should be other people who can go out and share with individuals and communities throughout the globe. This way, like the disciples who were instrumental in spreading the Good News, we can “go and reap a harvest that we have not sown”, as Jesus says in the Messages.

While in Rome, Vassula created 27 questions which addressed the major themes in all the volumes to date. This way, by answering these questions correctly, the individual would have a framework on which to build a witnessing talk.

Whosoever desired to answer the questions “sat the test”, so to speak. If the individual passed, Vassula then requested that this person make an audio tape so that she could listen and discern as to how that individual may transmit the knowledge of the Messages to a listening audience. And so, a group of witnesses came about. A group of Organizers also volunteered from other countries. They organized meetings according to Vassula’s standards. 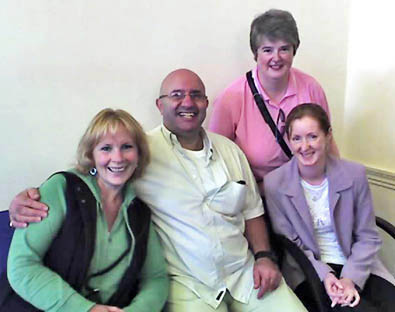 Personally, I feel that this opportunity is a great grace. I have witnessed that many people who come to these meetings have some bearing on what the content of the witnessing will consist of. For example, the evening before and on the morning of the witnessing in Dublin, I became very aware, through several conversations, of the different gifts that we are given and how we use these gifts to bring others to know Christ. Having no idea as to how I would start the witnessing in Dublin other than referring to the framework I have mentioned, I found myself talking about the different talents that we are all given alluding, “we have many parts in one body and all these parts have different functions”, Romans 12,4-5. This, to me, then seemed to naturally flow into getting to know God; to love Him more through this deepened knowledge; and having a desire to know Him more, thus understanding a unity between Godhead and His Creation.

I was able to notice the attentiveness of the people present and was aware that people, hungry for love and hungry for the knowledge of God, sat for an hour and a half – listening. When a change was necessary, I punctuated the witnessing with anecdotes that have been handed down from Vassula’s experience in getting to know Jesus in and through the special charism that she has. Anne Marie has kindly written what she heard during the witnessing and I hope that these two short reports serve the purpose of letting all readers know that what we have through these Messages is very, very special. As Jesus says, These Messages heal and save souls. I could go on and on to talk about the Love that I have come to know through the writings of True Life in God, except the Glory to God lies in the writings themselves. To conclude, therefore, as we approach the feast day of one of my favorite Saints, “Pick up and Read”!