The Testimony of Fr Joe Iannuzzi

Recently I received emails from individuals from various countries asking me if the private revelation received on February 13, 2016 by Vassula Ryden (see below) is indeed an authentic one.

As a theologian in dogmatic and mystical theology, conversant with the criteria by which the veracity or lack thereof re. alleged seers is determined, I refrain from supporting anyone who claims to receive messages that contradict divine or church teaching. Conversely, I extend my support to those messages whose content is consistent with the divinely revealed truths contained within the Deposit of Faith.

Apropos of the published private revelations of Vassula Ryden, whose pages I have assiduously scoured for more than 25 years, I can happily affirm that they contain nothing that is contrary to the Church’s faith and morals – they do not contradict Sacred Scripture, Sacred Tradition or Magisterial teachings. Indeed, the Church hierarchy’s seals of approval that they bear, i.e., imprimatur and nihil obstat, ride on their own merit. Their content moreover reveals one of the most loving and urgent appeals to the Church and to mankind at this pivotal juncture in its history in which many will witness the fulfillment of biblical prophesies.

Let us recall that when our Lady of Fatima foretold that many nations of the earth would be annihilated if mankind did not convert, she did so after she made an urgent appeal to the Church and to mankind at a pivotal time in its history. I see a parallel appeal to the Church and to mankind today in the ecclesiastically approved private revelations of Vassula Ryden. More significantly, the consequences of this appeal, if unheeded, will be global.

Concerning the Church’s hierarchy, in 2005 the Vatican theologian and Bishop Joseph Grech was appointed by Joseph Cardinal Ratzinger to ask Vassula, on behalf of the CDF, certain questions regarding her writings. The same Bishop J. Grech was elevated to the office of

Cardinal in 2012 and delivered the opening meditation at the 2013 conclave with elected Pope Francis. More recently, Prospero Cardinal Grech has written a timely review for Vassula’s recent book, “Heaven is Real but so is Hell,” which appeared in “Inside the Vatican” (January 2014 edition). It is noteworthy that the sales of Vassula’s writings go toward the sustenance of orphans, the poor and the hungry that she was inspired to assist in 1998 through the establishment of international Beth Myriam houses.

With respect to those who frown upon Vassula’s approved writings on account of the Vatican Notification of 20 years ago or of the 2007 letter of the Prefect of the CDF, I here recall some of the writings of Antonio Rosmini, Faustina Kowalska and Luisa Piccarreta, which were at one time placed on the Index of Prohibited Books, only to be later carefully examined by qualified theologians and rehabilitated in their entirety. Unlike the writings of A. Rosmini, F. Kowlaska and L. Piccarreta, Vassula Ryden’s writings were never condemned and, more recently, scores of Cardinals, Bishops and Priests have in writing endorsed and applauded her for them and for the establishment of said Beth Myriam houses. 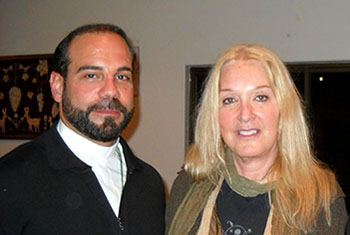