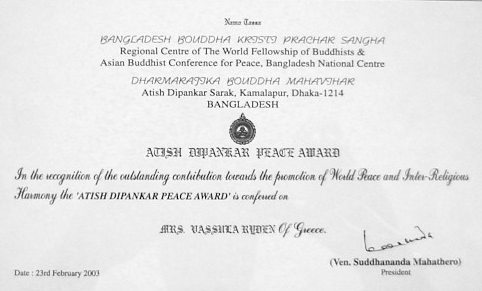 Vassula was personally invited by the Venerable Suddhananda Mahathero, President of the Bangladesh Bouddha Kristi Prachar Sangha, to receive the “Atisha Dipankar & Visuddhananda Peace Gold Award” this year, on the occasion of the 94th birthday of the late President and founder of the Buddhist Monastery. The Peace Gold Award 2003 ceremony was held on Sunday, February 23, 2003.

The function was presided by Venerable Suddhananda Mahathero -who had joined the Inter-religious pilgrimage of TLIG last October in Egypt- and was inaugurated by Reverend Michael Rozario, Archbishop of the Catholic Church in Bangladesh. Among the special guests that evening that honoured with their presence this important event, was also the Secretary of the Apostolic Nuncio in Dhaka, Prof. Dr. Kazi Nazrul Islam of the Department of Philosophy at the University of Dhaka, Prof. Ranjit Kumar Chakraborty, Rector of the Ashalata College, Chittagong and many representatives of the 4 major religions (Christians, Muslims, Buddhists and Hindus) but also of different Embassies and of the intellectual and business world. 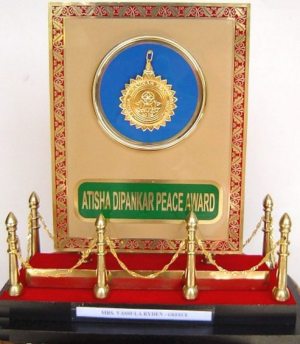 Vassula was nominated for this Peace Award by the Buddhist monks as a distinguished personality in recognition of her great contribution and her efforts for establishing inter-religious harmony and promoting world Peace among all peoples and faiths. Her speech on the inter-religious dialogue being a valuable treasure, the power of prayer, the importance of maintaining peace and the good works being necessary to prove our faith, kept everyone in the Hall speechless not to miss a word of hers. Profoundly moved by her words, the Professor of the Department of Philosophy at the University of Dhaka, Dr. Kazi Nazrul Islam, arranged for her to visit the University and give a talk at the Department of World Religions at the University of Dhaka on Wednesday the 26th of February with the kind assistance of Prof. Joseph O’Connell.