› The Messages › Handwriting
An Analysis by J.A. Munier SGF

Fr. René Laurentin submitted the messages of Vassula to J. A. Munier, a licenced graphologist of the highest reputation and consultant for the Court of Appeals of Paris, France. He did not tell him anything about the matter except for the age (47) and the first name of the lady whom he did not know. The analysis, which is reproduced below, includes analysis both of the large handwriting (of Jesus) and the small (Vassula’s normal writing).

The report was prefaced with the title:
“Graphological interpretation, with no previous information (and without taking into consideration the text itself due to lack of knowledge of the English language)”

Interpretation of the large letters dictated by Jesus:

Additional interpretation of the fragments of handwriting in smaller letters between the lines: 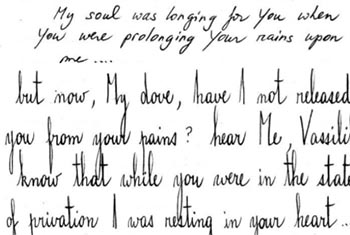