Archbishop of Lipa City, Philippines writes commentary on the letter from Cardinal Ratzinger regarding Vassula Ryden and True Life in God 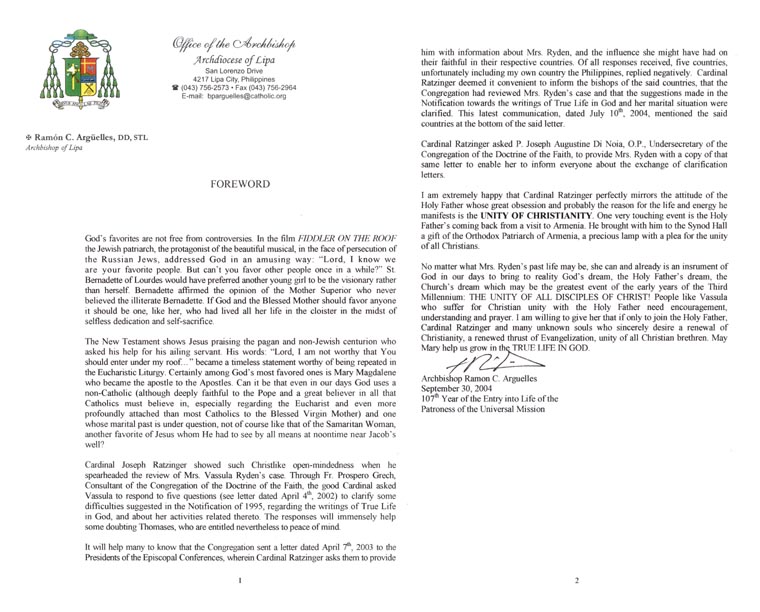 Cardinal Joseph Ratzinger showed such Christlike open-mindedness when he spearheaded the review of Mrs. Vassula Ryden’s case. Through Fr. Prospero Grech, Consultant of the Congregation of the Doctrine of the Faith, the good Cardinal asked Vassula to respond to five questions (see letter dated April 4th, 2002) to clarify some difficulties suggested in the Notification of 1995, regarding the writings of True Life in God, and about her activities related thereto. The responses will immensely help some doubting Thomases, who are entitled nevertheless to peace of mind.

It will help many to know that the Congregation sent a letter dated April 7th, 2003 to the Presidents of the Episcopal Conferences, wherein Cardinal Ratzinger asks them to provide him with information about Mrs. Ryden, and the influence she might have had on their faithful in their respective countries. Of all responses received, five countries, unfortunately including my own country the Philippines, replied negatively. Cardinal Ratzinger deemed it convenient to inform the bishops of the said countries, that the Congregation had reviewed Mrs. Ryden’s case and that the suggestions made in the Notification towards the writings of True Life in God and her marital situation were clarified. This latest communication, dated July 10th, 2004, mentioned the said countries at the bottom of the said letter.

Cardinal Ratzinger asked P. Joseph Augustine Di Noia, O.P., Undersecretary of the Congregation of the Doctrine of the Faith, to provide Mrs. Ryden with a copy of that same letter to enable her to inform everyone about the exchange of clarification letters. I am extremely happy that Cardinal Ratzinger perfectly mirrors the attitude of the Holy Father whose great obsession and probably the reason for the life and energy he manifests is the UNITY OF CHRISTIANITY. One very touching event is the Holy Father’s coming back from a visit to Armenia. He brought with him to the Synod Hall a gift of the Orthodox Patriarch of Armenia, a precious lamp with a plea for the unity of all Christians.

No matter what Mrs. Ryden’s past life may be, she can and already is an insrument of God in our days to bring to reality God’s dream, the Holy Father’s dream, the Church’s dream which may be the greatest event of the early years of the Third Millennium: THE UNITY OF ALL DISCIPLES OF CHRIST! People like Vassula who suffer for Christian unity with the Holy Father need encouragement, understanding and prayer. I am willing to give her that if only to join the Holy Father, Cardinal Ratzinger and many unknown souls who sincerely desire a renewal of Christianity, a renewed thrust of Evangelization, unity of all Christian brethren. May Mary help us grow in the TRUE LIFE IN GOD.

Archbishop Ramon C. Arguelles
September 30, 2004
107th Year of the Entry into Life of the
Patroness of the Universal Mission