The TLIG Associations and Prayer Groups all over the world have, as their objective, the diffusion of the Messages given to our generation by the Lord Himself. This endeavour is guided and sustained by the Holy Spirit who calls the world today to Unity: in families, in communities, in each country, and in His Church, among Catholics, Orthodox and Protestants. TLIG readers gather together to pray intensely for this Unity to come, putting into practice what the Holy Scriptures and the Messages teach us. TLIG Ecumenical Pilgrimages and Retreats have been organized as means to discover and share the richness of different Christian denominations, each one of them presenting the rite and liturgy of its tradition to the others. Catholic, Orthodox and Protestant clergy and laypeople are brought together to experience a living ecumenical dialogue in a spirit of humility, reconciliation and love – in the Trinitarian spirituality of TLIG.

The main International TLIG event for 2006 took place in Barcelona last May. After the very successful TLIG International Ecumenical Pilgrimage to Lebanon, Syria and Jordan in May 2005, the task of organising the annual Iberoamerican Ecumenical Meeting was assigned to TLIG Spain this year. Previous meetings had taken place in Puerto Rico, Mexico and Colombia. 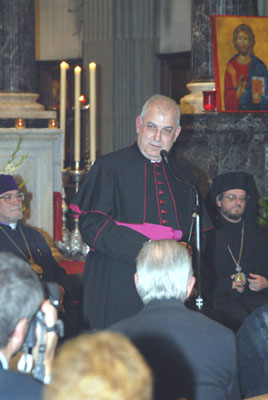 Every TLIG helper knows very well that, without a special grace from God, they are unable to organise or even attend a TLIG meeting or retreat. Hardly would they have started that they would come across countless obstacles, sometimes even relentless persecutions. Thus, from a lot of points of view, the 4th Iberoamerican Ecumenical Meeting was truly at the same time a wonder, a blessing and a concrete testimony of TLIG Spain for Christian Unity.

Yet, true ecumenism cannot be done without the local Church, in particular with the Hierarchy of the local Roman Catholic Church. And because of this, TLIG Spain would never have imagined that it will get the warm support from the Diocese of Sant Feliu, a small diocese outside Barcelona, rather than from the Diocese of Madrid, as TLIG Spain initially had thought and would have preferred.

Some 180 TLIG friends from all over Spain, Mexico, Uruguay, Argentina, Colombia, Panama, Venezuela, Portugal and Brazil, but also from England, France, Switzerland, Denmark, Germany, and the U.S.A, joined the 30 priests and bishops from nine different Christian denominations in this meeting. This group of fervent TLIG readers were welcomed at the St. Josep Manyanet Retreat House, a peaceful haven in Begues. During five days the small retreat house on the hills surrounding the city of Barcelona was literally jam-packed, not only full with crowds, but full with an atmosphere of Unity and a missionary spirit. The theme of the Conference was: “Be one under My Holy Name.” The opening day, Saturday 13th May, feast of Our Lady of Fatima, the bishop of the Diocese, Mgr. Agustín Cortés, graciously came to preside over the celebration of the Holy Eucharist. 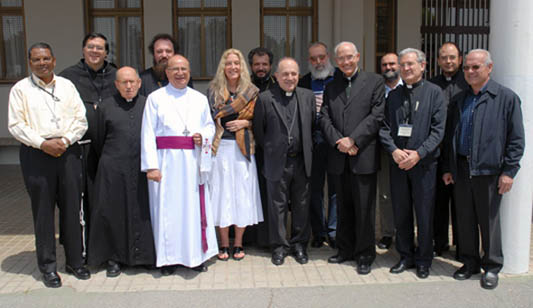 Because of the presence of so many bishops of different denominations, the programme of the 5-day meeting was necessarily very rich in message and in experience. Basically, four or five speeches were delivered per day, by the clergy of different Churches and by Vassula. Our honourable guest speakers were the following:

Mgr. Jaume González- Agápito, Delegate for Ecumenism of the Diocese of Barcelona
“The Petrine Ministry in the Third Millennium of the Church”

Rev. Francisco Javier García – Pastor of the Evangelical Church
Director for Europe of the AGAPE Movement (International organisation for Christians
of all denominations)
“Salt and Light of the World” 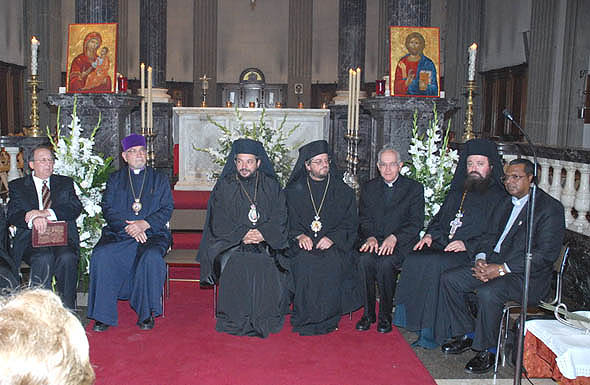 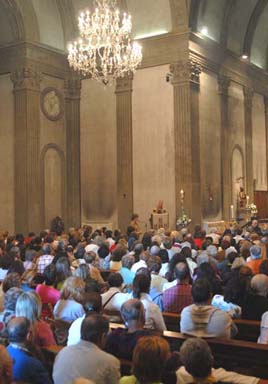 A public meeting in the beautiful Parish Church of Santa María de Montserrat de Pedralbes was organized by the TLIG Association of Spain on Sunday 14th May. Mgr. González-Agápito, Parish Priest and Delegate for Ecumenism of the Archdiocese of Barcelona, personally received Vassula and the delegation of illustrious clergy who accompanied her. She was expected to deliver the Messages to an audience of 500 people, including many priests and religious. The clergy were dressed in full regalia. They were offered a place of honour in front of the magnificent high altar, so that they could have a foretaste of the Unity to come. Vassula spoke extensively about the Lord’s ardent desire to see His Church united and being ONE again.

On Tuesday 16th May, all the participants of the Retreat were brought on a day’s pilgrimage to the Benedictine Monastery in Montserrat, one of the most well-known Benedictine monasteries in the world, with the very holy Shrine of Our Lady of Montserrat, the much-loved Patroness of the people of Catalonia. High up in the mountains northwest of Barcelona, the dramatic climb through spectacular rock formations took us to the Monastery where the Benedictine monks are the guardians of this reputed place of pilgrimage dedicated to the Mother of God. 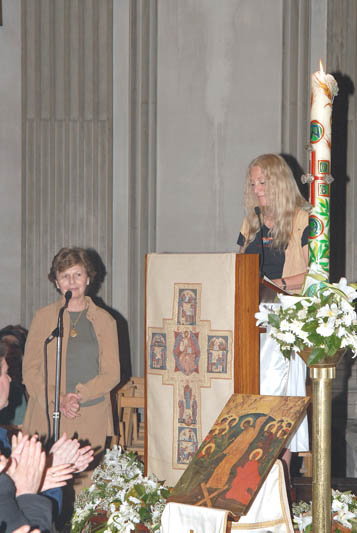 The participants of the meeting had a solemn celebration of the Holy Eucharist with the Benedictine monks of the community and many other pilgrims. The clergy were invited to sit with the monks during the Holy Mass celebrated by the Abbott as the TLIG group of laypeople were allowed to occupy the pews in the front. A beautiful liturgy of the Holy Eucharist was celebrated in the Latin, Spanish and Catalan language, reminding us of Spain’s rich Christian heritage. Over the centuries, Spain was a champion of faith, its missionaries left its coasts and set forth to evangelize to the world, while its great saints fostered the Church in Europe.

The joy of the Holy Spirit pervaded the atmosphere, our Orthodox guest clergy and participants were given a glimpse of the Roman Catholic devotion to their beloved ‘Theotokos’ (Mother of God). Spontaneously, the Armenian Orthodox Bishop Shirvanian stepped forward, and standing upright, chanted an Orthodox hymn of praise in Armenian, which resounded throughout the Basilica! He was immediately followed by the Ukranian Orthodox Bishop Ferens who hymned in Ukranian, and then by Archimandrite Nikolaos who in his turn sang in Greek! This is not unusual in TLIG gatherings, blessed be the Lord, but it was definitively a première in that splendid Basilica.

At the retreat house, every morning the meeting started in the chapel with songs of praise and worship sung to the risen Lord, in Spanish: “Resucitó!” and in Greek: “Christos anesti!” to testify the joy of the big TLIG Family during the Eastertide both of the Catholics and of the Orthodox, and to show their firm will to end the age-long division between the Eastern and the Western Church by praying and working as hard as they can for the unification of the Easter dates. While praying and celebrating the Holy Eucharist together, all the participants, though belonging to different denominations, had truly experienced the blessing given by God to be ONE around the same altar and the extraordinary power of being united in one voice and one heart:

“…pray for the house of the East and the West to join together, like two hands when joined in prayer, a pair of hands, similar, and in beauty when joined together pointing toward heaven when in prayer. Let those two Hands, belonging to the same body, work together and share their capacity and resources with each other…Let those two Hands lift Me together…” June 15, 1995 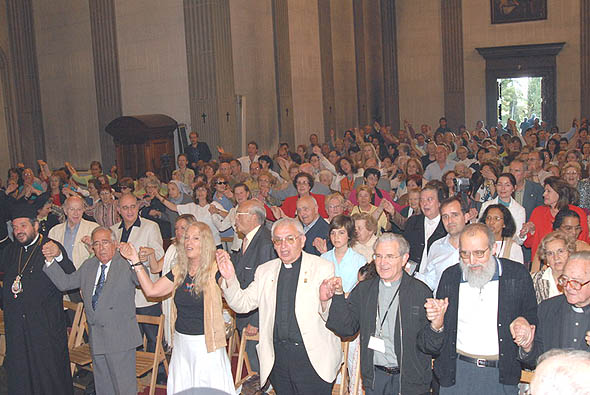 If only the Christians all over the world could understand how powerful their testimony can be if they are one in the Lord without differentiating themselves and how their unity can make the world believe that Jesus is the Messiah, the Son of God. (cf. Jn 17:21)

The members of TLIG Family living in different parts of the world are all called by God to share the most urgent and important mission of Vassula: to restore the unity of ALL Christians, the unity that Christ’s first disciples used to have while Christ was among them. So long as the Church of Christ today, His Mystical Body, God’s people in our times remains divided, Christ’s last command to His disciples (Mt 28,19-20), which is also addressed to all His followers until the end of the world, can never be carried out. That’s why Christ has come to His Church through TLIG Messages, to teach His followers how to repent, to live holy and to be one again, in one word, to be a true disciple of His and to bearing His Cross of Peace and Unity in our days. Every TLIG Family member is searching for nothing else but to become an authentic disciple of Christ, a believer who follows Christ daily, who belongs to Christ and who serves God and his neighbour like Christ has taught in the Gospels. This is what happened during the 4th Iberoamerican Ecumenical Meeting in Begues. As Christ has promised His disciples of all ages that He will be with them, all the difficult organization work done only by several people before and during the meeting proved that He is truly risen from the death and is alive and is with the helpers of TLIG Spain.

To promote Unity of Christians, one single TLIG meeting, no matter how big and how successful it turns out to be, is not enough: “My Message saves, and time is short, what you have commenced I blessed; give this generation My Bread of understanding to eat and the water of wisdom to drink; My Message nourishes and quenches their thirst;” July 4, 1994 Indeed, more TLIG meetings need be organized in different parts of the world as soon as possible. Therefore, TLIG Spain would like to encourage the TLIG members in other countries to do the same and to voice its heartfelt thanks to all those who attended the recent TLIG meeting in Spain, particularly to the priests and bishops who set an example to us by sharing publicly their own testimonies with the others. 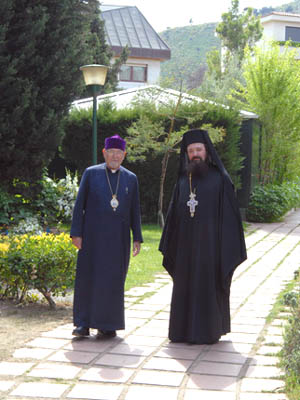