› Events and Activities › Ecumenical Pilgrimages › Greece 2009 – "In the Steps of St. Paul"
Apostolic awakening in Greece under the patronage of Saint Paul 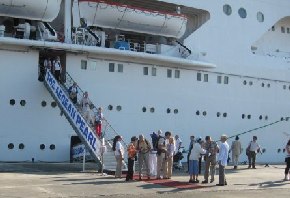 From 3-11 September 2009 we travelled by boat, bus and on foot to holy places in Greece on a pilgrimage centred day by day on the Eucharist with acts of devotion and countless holy and humorous conversations.

The 7th True Life in God ecumenical pilgrimage was inspired by Vassula Ryden’s Divine Messages which call for renewal in the Holy Spirit among Christians, recovery of visible unity in the Church and a fresh evangelisation in the world.

Corinth – a call to fearlessness

We began our pilgrimage on the Friday in the ancient ruins of Corinth, a city situated between the beautiful Aegean and Ionian seas. We gathered by the ‘Bema’ or platform where St Paul answered to Consul Gallio for his Christian faith. From Corinth we took a reminder of that confidence to proclaim and answer for Jesus that thrills through the Acts account of Paul’s visit and his two letters to Corinth. 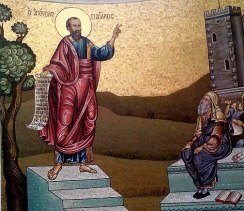 In Corinth the apostle answered for his Lord heartened by words from Jesus he received in a dream. ‘Do not be afraid, but speak and do not be silent; for I am with you, and no one will lay a hand on you to harm you, for there are many in this city who are my people’. The Acts of the Apostles relates his calm, reasoned and fearless witness.

With my fellow pilgrims I found myself asking. ‘Lord, build my confidence in you so that my Christian witness can be more fearless! Take away my timidity! Give me your Spirit afresh!’

Those first struggles in Corinth were to bear fruit for all time. Almost 2000 years on Corinth continues within a Christian nation. One man’s fearlessness has led to many transformed lives. It happened then and it can happen now.

Athens – a call to humility

From Corinth 18 coach loads of us from 55 countries and 16 Christian denominations travelled back to Athens to walk up the last stretch of the hill that rises to the ancient Parthenon towering over the capital of Greece.

We were literally in the footsteps of St Paul. There just below on Mars Hill the apostle held his famous dialogue with the men of Athens reported in the Acts of the Apostles Chapter 17. 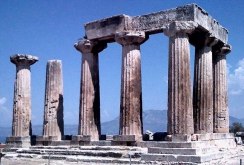 I walked up with Jim who has set up dialogues on American University campuses about the existence of God and the claims of Christ. Through Jim’s ministry hundreds of young people are entering conversations about Jesus.

I thought to myself about devising more occasions for my church members to invite dialogue with seekers about Christ. Jim had taken St Paul’s vision forward to debate the truth of our Christian Faith. I also needed to do more to recreate in my own life and ministry what first happened on Mars Hill in Athens.

Paul questioned the Athenians about their Unknown God. He quoted their poets. He had researched Greek culture to find an opening for the good news of Jesus. My visit to Athens with Jim reminded me Christianity is no monologue, just us speaking of Jesus, but a dialogue in which we listen and speak.

Dialogue takes more humility than monologue. It takes time and patience and, above all, love. In True Life in God ears are open to one another across Christian traditions. They are also open to non-believers.

Jesus my only love, I pray for those whom You love but know not how to love You, may they be purified and healed so that they too be exempt from all evil; amen
(TLIG – August 8, 1993)

Patmos – a call to truth

On the Sunday appropriately we were on Patmos Island where, in the spirit on the Lord’s Day, God gave the Book of Revelation to the Apostle John. 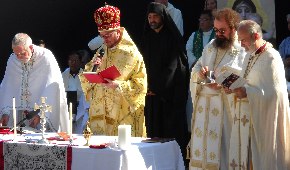 I entered the cave where Saint John is meant to have heard God and I knocked my head. A reminder from Jesus maybe that my knowledge of him needs knocking down from my head to my heart! So many of us priests need reminding that we do not have all the answers. Jesus has!

As we broke bread for Sunday within the Orthodox Liturgy there was a sense beyond the multitude of us of ‘that multitude beyond number’ that we read of in the last book of the Bible. 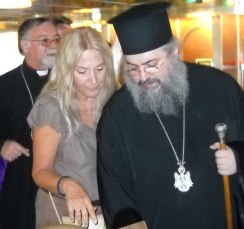 Our pilgrimage was reminded on Patmos, island of Saint John the Divine, that our Christian faith is a revealed faith. It could never have been invented the way it is by humans. That God has revealed himself in the face of his Son is truth we accept as shown us by God, the same God who spoke to St John in the cave of Patmos.

Later the Abbot of Patmos, Archmandrite Antipas, came on to our ship and spoke to the pilgrims about the world’s apostasy from the truth of God as being the root of the ecological crisis. We need the sacraments to wake us up to the truth as God shows it. Through prayer we are called to become mystics like Saint John, secret friends of Jesus.

Father, Righteous One, My Shelter, send out Your Light and Your Truth, let these be my guide. (TLIG – November 13, 1987)

Monday’s liturgy in Orthodox rites has a special invocation of God’s faithful archangels. On that day pilgrims visited two monasteries, one of them dedicated to St Michael Archangel who is patron of the island of Lesvos we were visiting.

On their bus journeys pilgrims shared tales of encouragement, sang and prayed to cheer their journey. I was moved to witness the powerful intervention of Saint Michael in my own life, two remarkable occurrences on his Feast day: my being spared in 1969 from a near fatal scooter crash and my being filled with the Holy Spirit after a time of desolation in 1978.

Our Christian life is warfare. When we fail to admit this we are submerged by the world, the flesh and the devil. God’s angels awaken us to join battle in sure confidence that ‘he who is in us is greater than he who is in the world’ (1 John 4.4).

Saint Michael the Archangel, defend us in the day of battle, be our safeguard against the wickedness and snares of the devil.
(Part of the daily prayer recommended by Jesus in the Messages)

Philippi – a call to praise

On Tuesday from the port of Kavala we travelled inland to Philippi in the steps of Saint Paul. 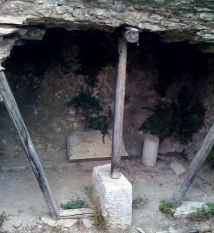 Acts 16 records how the good news of Jesus reached Europe. The baptism of Lydia by Paul outside Philippi was a bold development. It also cost Paul. In Philippi you can still see the jail where he was imprisoned with Silas. Undeterred the two missionaries praised God and there was power in their praise. The doors of that jail gave way as God sent an earthquake releasing his servants.

As I led our group constructed across many Christian denominations in prayer I found myself asking the Lord so to release praise in his churches that the walls that separate us will also come down!

Saint Paul wrote later on to Philippi in a most joyful letter: ‘Rejoice in the Lord always and again I say rejoice’. We sang those words together.

Following Paul’s footsteps in Greece made plain how much he suffered for Our Lord. He did not always have good circumstances. Even if he could not rejoice in his circumstances they never stopped him rejoicing in Jesus.

So be it for us in our own circumstances! May our eyes be fixed on Jesus and our hearts filled with his praise whatever befalls us in this world!

No man can glorify You enough, yet my heart calls incessantly Your Name because You have set my heart on You.
(TLIG – December 4, 1990)

Thessalonika – a call to venturesome faith

Wednesday saw pilgrims landing from our boat in Greece’s second city, Thessalonika, the oldest city in Europe and a vital bridge between Europe and Asia. There the Holy Spirit called Paul to found a Church to which he wrote the earliest documents of the New Testament, the two letters to the Thessalonians. 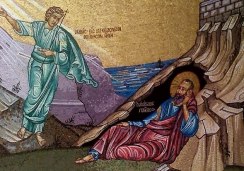 Paul’s visit demonstrated a venturesome faith obedient to the strategy of the Holy Spirit for world evangelisation which continues to our own day and to which True Life in God is eloquent witness.

In Acts 17 we read how the citizens of Thessalonika got angry with Paul. He had ‘turned their world upside down’ they said. That is a pretty good accusation against an evangelist!

This Jesus, Paul insisted, is of universal significance. Towering in the far distance we saw on our pilgrimage Mount Olympos source of Greek legends of the gods. Paul must have seen this mountain and the devotion of the Greeks to their gods. All of this did not deter him from pointing to one God and Father and one Lord and Saviour Jesus Christ. 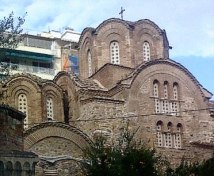 Later he wrote back to Thessalonika of the Saviour’s coming return. Welcome this good news he said ‘not only in word, but also in power and in the Holy Spirit’ (1 Thessalonians 1.5)

Our pilgrimage to Greece was for many of us an awakening of apostolic vitality, a call to seek that empowering of faith which Paul to this day invites in his letters.

May the Lord and God Almighty be Blessed, may His Kingdom reign in eternal glory, may His Holy Name be glorified, may His Word penetrate and rest in each heart; amen
(TLIG – March 26, 1987)

Meteora – a call to prayer

Our last full day was a Thursday. It took us from the port of Volos to the Meteora Monasteries perched on gigantic inaccessible rock formations. On the 2 hour bus journey pilgrims, led by one of the monks among us, shared the importance of the Jesus Prayer. 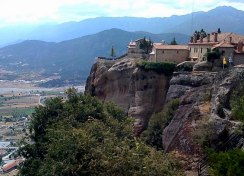 This form of prayer repeats the sentence ‘Lord Jesus Christ, Son of God, have mercy on me a sinner’ constructed from the Gospels. It is one expression of faithfulness to Paul’s call to the Thessalonians to ‘pray without ceasing’ (1 Thessalonians 5.17). The devotion is seen to centre prayer in the heart. It is associated with Jesus prayer ropes or rosaries widely in use in Orthodoxy and catching on more and more among True Life in God pilgrims.

At Saint Stephen’s Monastery our bus load of pilgrims associated themselves with the worship of that place by a time of public recitation of the Jesus Prayer. In a place where formerly monks and their artefacts were hoisted on ropes into seclusion we were discovering how a far smaller rope – the Jesus rope – can cause uplift and transformation.

I tell you if anyone prays this Rosary to Me, heaven will open to him and My Mercy shall save him.
(TLIG – January 18, 1990)

Fearlessness, humility, fidelity to truth, spiritual warfare, praise, venturesome faith and prayer are evidence of the apostle, one ‘sent as the Father sends the Son’ (John 20.21). Fresh awakening to this apostolate is aided by prophets since the church is ‘built upon the foundation of the apostles and prophets’ (Ephesians 2.20) The prophetic ministry of Vassula Ryden through the messages of True Life in God is awakening fearless apostles who accept the cause of building visible unity among Christians as prelude for a new evangelisation.

Our eight day pilgrimage concluded with the 110 bishops and priests leading the other pilgrims in signing an appeal to the wider church to agree a common date for Easter. ‘We are one in the Spirit, we are one in the Lord’ was our song, the song that continues ‘and we pray that all unity will one day be restored and (then) they will know we are Christians by our love’.