› Events and Activities › Ecumenical Pilgrimages › Lebanon, Syria and Jordan 2005 – "Walking with St Paul and the Prophets"
An Example of Unity in the East 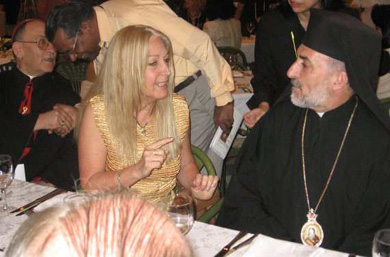 My problem is in which language I should speak. In Greek? Ellinika? Arabic? Or do you prefer French? English is better. So you have to support my poor English. OK? If you don’t understand you tell me, so maybe I speak in Arabic.

Welcome in Damascus! I am the Patriarchate Vicar for the Greek Catholic in Damascus. I will tell you the reality of the church in Syria. Syria has Chalcedonian and non-Chalcedonian because all the counsels of the Church in the history was in our land. So, our land is a Holy Land. St. Paul comes from here. So, I beg your pardon I didn’t know you come in Damascus, because we would have liked to prepare something for you. You were in our Cathedral this morning. I was absent because I had two masses in other churches.

I arrive in Damascus in 1992. The people told me that here on this street there is a Mosque but it was before a land for a Church.

We didn’t take it because we are in division. So, the government decided to give it to the Moslem. So, the Moslem took two lands; one for the mosque and the land for the church, because we are not in union together. So, we lost a lot of lands and we cannot build churches.

I decided to do something for Damascus. I go to the Greek Orthodox Church to meet the Patriarch and I ask him “Beatitude, why do we have to lost lands? Please we can sign a paper for the government and we can begin to take the land. He said, “what for? We cannot build church together.” I said, “Maybe we can do it in a few years. Now, we decide to take the lands” and it was o.k. He signed. The Greek Orthodox Patriarch Ignatius and the Greek Catholic Patriarch Maximos Hakim. He has died now.

So, I said, ok. I need another letter please. Sign me another letter together and I will find the money in Europe. I go in Europe and I raised more than $300,000 dollars and I begin the church.

It was a reality now. But it isn’t finished. So I go to the Patriarch Orthodox and Catholic and said we have to finish we cannot stay like that. So everybody from the Greek Catholic and the Greek Orthodox paid half and half to finish the Church. Now, the church is finished.

We don’t celebrate together. We have two masses on Sunday, one for the Catholic and one for the Orthodox – because the Greek Catholic and the Greek Orthodox are the bigger community here in Damascus. But, if other communities would like to celebrate the Mass they can. If they are Catholic, they take the hour of the Catholic Church. If they are Orthodox, they take the hour of the Orthodox Church. So we can celebrate in the same place. This is the first step for the Unity. (Great applause)

For the Easter feast it is very important. We have two Easter feasts in Syria. It is a bad thing for the church. We didn’t testify Jesus Christ. To the Moslem, when they see us have two Easter, two Crucifixions1, two Resurrections it is too much. We didn’t arrive for a solution. We know that the acceptable solution until now is that the Catholic celebrates with the Orthodox. The Orthodox cannot move till now. We hope that we will move in the future for the solution of the Christian world together. But we think that we will have to do something next year. Maybe, next year like we begin in the church of Dumar. On this year, we don’t not accept to celebrate two feasts in the same church. We celebrate with the Orthodox together (Great Applause). This means we have to celebrate every year together. (Again, great applause)

I am very optimistic for the future. From Syria, in the history of the Church it has many solutions for the problems of the church. From the time of Aryanism and other problems in all the history from Syria it is called in every time for solutions. I prefer to call my Church “Bridge”. Bridge between the West and the East. Because, we know that the church is the East and West together.

We are Greek Catholic and we know that Greek Catholic it means we are Byzantine and we are in our heart Orthodox but in the same way, in the same time, we like the unity of the church. And therefore, we are happy to be Catholic. But we didn’t forget, never, that our origin is Orthodox. So we have to continue to be Orthodox in the Catholic Church. (Great applause)

I finish and I will introduce my Church for you.

We have some specificity. Here we are Arab and we are very happy to be the church of Arab but we are not Moslem. We are Orthodox in union with Rome. We are Catholic but not Latin. We will never forget that we are Orthodox in the Catholic Church.

1 After reading this it is hard not to think of what Jesus says in the Message dated December 7, 1994:

“love Me …. let your heart be My fragrance, fragrance that will draw My House into one, fragrance that can bring My shoot from the East to call out: “the Amen wants His Promise to be fulfilled, the Risen Christ is at our very doors with sorrow in His Eyes …. for we have doubled His agony, His Cross, and His Crucifixion;

the Holy One is at my doors, Brother, like the Appearance to His disciples, He tells me: ‘peace be with you; as the Father sent Me I am sending you, go now and meet your Brother and unite the dates of Easter, then I shall give you the gift of love and restore your sight; I do not want you to perish in your own folly; double indeed is My grief; double is My groaning; go now and alleviate My pain, brother, go and glorify Me by unifying the dates of Easter;'”