› Events and Activities › News › All News
Vassula in Paris

Vassula was given this invitation while in Sweden, as she was spending her Christmas holidays there with her family.  Instead of returning back to Rhodes on January 5th, Vassula went straight to Athens, destined for Paris, along with me.

The True Life in God friends in Paris assisted in setting-up the preparations to accommodate this important interview, providing the visitors transportation, hotel accommodations, and hospitality.

On the following day, before the television show began, Vassula was subsequently asked to be interviewed on radio by musician and interdisciplinary researcher Peter Bannister, who considers the authenticity of the Messages to be indisputable. 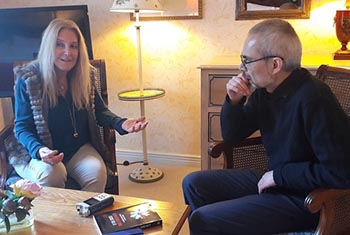