A handful of True Life in God followers in Iceland had shared the Messages within a small circle in their prayer group. For many years, they had been in touch with the websites and reports of Vassula’s worldwide mission; but after the initial effort to spread the Messages in 1992 had failed, it seemed to remain a close circle, until Skuli Thorvaldsson, his wife Paula and sister Katrin set out to hear Vassula firsthand in Edinburgh, in 2000, and Brighton, Oct.25, 2003 and then in New York on May 27, 2004. He missed the opportunity in Brighton to invite Vassula to Iceland, and afraid that an audience totally unfamiliar with the Messages would not respond, he waited. But in New York, he knew the time had come. 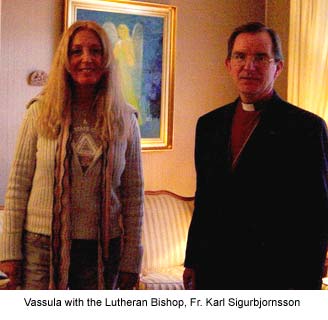 Returning home, he contacted Nils Christian Hvidt in Denmark, who received a yes from Vassula that same day. With a date, Oct. 3, 2004, the little group sat down to planning in earnest. They contacted first Rev. Sigurdur Pálsson, and then the Bishop of Iceland, Rev. Sigurbjörnsson of the Lutheran Church, who gladly agreed to provide the sanctuary of the Hallgrimskirkje, a church built like a Viking ship, towering over all Reykjavik. With the guidelines received, VCD’s were distributed; and posters and flyers designed. When the chief executive of the largest advertising agency in Iceland, Mr. Jonas Olafsson, saw the videos, he said, “This is awesome; this is the real thing. I am going all out and I will charge nothing.”

The enthusiasm spread to his employees, who produced five nine-foot silk screen posters of the Holy Face to be placed in the church. 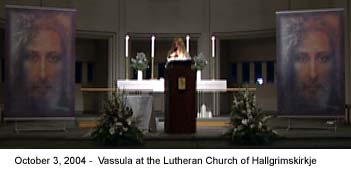 Advertising began three weeks prior with half-page newspaper ads, repeated four times, in two of the largest newspapers covering the entire nation. A full-page ad was taken out on the very day, calling people to come “tonight.” A country with the highest ratio of daily publications per capita, every household was reached. The last week before the presentation an email campaign began to friends, business associates, their families. State radio interviewed Skuli on its Sunday morning talk show, and he answered questions about the Messages and stressed the nonprofit nature of Vassula’s mission. Posters and flyers were distributed throughout the city, in churches, hospitals, bus stations, airport terminals, fitness centers, clubs and organizations like AA and the Salvation Army. The organizers in Denmark, enthralled by the beautiful poster, asked to use it in their presentation as well. Flowers were ordered, and sound and video experts were booked.

Books had been ordered, from Trinitas, 20 copies of each handwritten volume, and from England the printed version, the Enigma and prayer books. These were for sale in the vestibule of the church. All proceeds from sales were donated to the church and leftover volumes donated to the church gift and bookshop with order lists for future sales. In view of an audience not familiar with the Messages, the most beautiful 8-page handouts containing in Icelandic Vassula’s background, a picture of the Holy Face, backed by quotations of Messages on Love, peace, unity and Mary. Many people afterwards said they would frame this as a memento.

The organizers met with the Catholic Bishop of Iceland, Fr. Johannes Gejsen, who received them cordially, but declined the invitation and refused the videos, but accepted the Farfa discourse and the correspondence between the Vatican and Vassula. He refused permission to place a flyer in the church vestibule and was informed with regret that the Catholic Church in Iceland was the only parish to refuse the posters or the invitation.

On Sunday, October 3, a blustering day, Vassula arrived with her companion, Michael Bornet; and Skuli and Paula met them at the airport. The luggage, however, did not arrive; and Vassula’s notes were in it. They were taken to the hotel to quickly plan their notes before attending Bishop Sigurbjörnsson’s reception. Bishop Sigurbjörnsson had invited other priests, Rev. Jon Dalbo Hrobjartsson and Sigurdur Palsson, with their spouses, and Vassula explained the nature of her mission, and was presented the program for the evening.

At 7:30 pm, the program started with organ and choir by Lára Eggertsdóttir and Graduale Nobili. Skuli then wished everyone welcome, speaking in Icelandic, explaining Vassula’s mission and informing the audience of the availability of the Messages in Iceland in the future. A video of the event was also to be available in the church gift store. After this Rev. Palsson blessed the audience, and invited Vassula to the podium.

Vassula began by saying that she had been informed that the Messages were new to the audience and so she began by telling them of her background, the beginning, speaking slowly, clearly and with intonation on her awakening, describing the love, tenderness and gentleness of God the Father. She described her own purification, and, like a teacher, guided the audience into the Message on repentance (Notebook 35, p.26): “All day and all night long, I call again and again all those who still err in this wilderness seeking Me; come! You who are still in this wilderness saying, `I have sought my Redeemer but have not found Him,’ find Me, My beloved in purity of heart by loving Me!…” 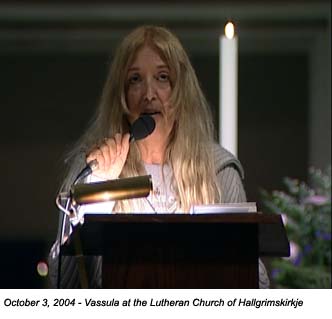 She told them the reward of Purification was Divine Love. The audience filled the church to capacity (800)-chairs had to be brought in and the choir steps in the back came in handy too.All sat absolutely silent intently following every word. She read the Message on consolation (Notebook 85, p.20). She ended with the prayer “In the morning sow your seed of Love…”

Vassula spoke for an hour and a half and said this was her first time in Iceland, the most northern point of her worldwide trek, and that she would gladly come back “maybe one more time.” As everyone stood, she raised her crucifix containing the relic of the Holy Cross and blessed everyone. There was a moment of utter silence when she smiled and said, “That’s all for tonight,” whereupon a spontaneous applause broke out. Skuli and Paula handed her a bouquet of flowers and led her out the side door as the organ was playing. The public filed out, and descended upon the two bookstalls. Volumes I and II, Angel Daniel, prayer books, Spirit of Love, and all printed versions sold out, as did the Ode of the Holy Trinity. One hundred rosaries donated by a retirement home in Washington with guidelines in Icelandic all went, and people were delighted to learn how to pray the Rosary. Order lists for online orders were grabbed as the organizers reordered for future availability in the bookstore of the church.

The next day, despite gale-force winds, Vassula and Michael flew to the Faeroe Islands. She had hardly landed when the phone rang in Pastor Hrobjartsson’s office. It was his brother, a priest active in Norway who was visiting the Faeroe Islands. He called to inquire about a woman who has just arrived from Iceland and was going to speak that night. “Do you know anything about her?” I told him, “This is a truly Christian woman. You can safely invite everyone to let her share the Word of God as she receives it.” What is interesting is that Vassula has not yet been invited to Norway.

The next day Bishop Sigurbjörnsson called the organizers to thank them and to express his gratitude for the inspiration he experienced meeting Vassula and finding his parishioners filling the church in silence, listening to the Word of God. Calls for books and prayer groups continued to come in several days to the church office and to the organizers, and so the “rivulet is turning into the river.”

In a country where people are reserved and religion is private, something truly spiritual had happened; for people called and spoke about this event with interest and eagerness to learn more about True Life in God