The Word of God is Alive and Active!
Proclaim a Risen Christ Present at All Times!

Switzerland, was the first country to host Vassula’s family after they had left Egypt. It is the country in which the diffusion of the TLIG Messages began. Back in 1985, Daniel, Vassula’s guardian angel, predicted in a message to Vassula that God will send her back to Switzerland to sow His divine seeds (the messages) there. It is interesting how God really works and a mystery that only in Heaven we will receive a full explanation. Why did God choose Bangladesh one of the poorest countries in the world, a Moslem country with just a few Buddhists and even less Christians, to approach Vassula and start this tremendous Work of His that He named True Life in God? And why did God had choose Switzerland one of the most developed and rich country to start seeding it with His Messages, and having Vassula start her apostolic work from there and from there to all the European countries? Was it because it is placed in the middle of Europe? This was a prophecy that came true, for just after a week that passed after receiving that message, her husband said to her that he had a job request for him to go to Switzerland.

After a few years, when Vassula and her family had gone to Switzerland the Ecumenical Conference of the World Council of Churches who got to know about the Messages of God, that were speaking about Unity of the Churches, were interested to invite Vassula to give them a speech, during Unity Week, January 23, 1992. Later Vassula was given opportunities to witness about the TLIG Messages every single month in different Churches and places in Switzerland. We must not forget that God had planned for her to remain for eleven years in that country to well establish not only the Messages and make them known, but also to start promoting prayers groups and create an Association.

This passed month the True Life in God Swiss German prayer group decided to throw an invitation to Vassula and bring her to Basel to give her testimony. Basel, is the 3rd largest city in Switzerland. It is located at the trinational point of the border of Switzerland with Germany and France.

Vassula accepted the invitation but decided to go to Switzerland a few days earlier before the meeting in Basel, to visit her family, as well as Servais and Cecilia Lutz. Cecilia, a very special woman and a very close friend of Vassula, was suffering from ALS disease (Amyotrophic Lateral Sclerosis) in the last 2 years and a half. Cecilia offered all her sufferings to the Lord for the Unification of the dates of Easter and the Union of the Church. One day before our departure for Switzerland we learned that our beloved friend had passed away to meet her Creator and Father in Heaven!

The funeral took place at Notre Dame of Vevey, May 6th at 2 p.m. in which Cecilia’s family was in peace. The Church was full of people. Among them Vassula met old and new True Life in God friends who had come to honor Cecilia and give their last farewell to her.

On Friday May 10th, Vassula and I departed from Lausanne to Basel by train. We were greeted at Basel’s train station by the organizers: Herbert, Ursula and Sylvia. 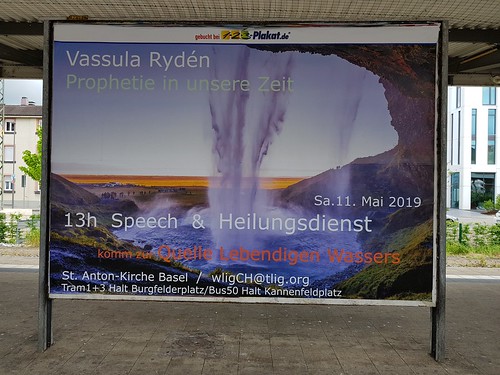 Advertising banners of the TLIG meeting in the streets of Basel.

On Saturday May 11th, the day started with an interview for Radio Maria of Switzerland. The TLIG organizers had arranged an interview with Father Thomas Rellstab who came to the hotel with Cornelia Rebhalz to interview Vassula. Father Thomas introduced himself and said: “it is a great honor to meet you Vassula”. Shortly before the interview began, Vassula said that she had never imagined what happened to her, meaning that God Himself would manifest Himself to her and speak to her. Father Thomas responded that he did not even imagine he would become a priest, as he wished to become a doctor and have a big family. The interview  began with Father Thomas asking Vassula several questions about the messages, her mission, the position of the Church, about all those who opposed this revelation etc. In Vassula’s answers, one discerns sincerity, humility and the spirit of God. 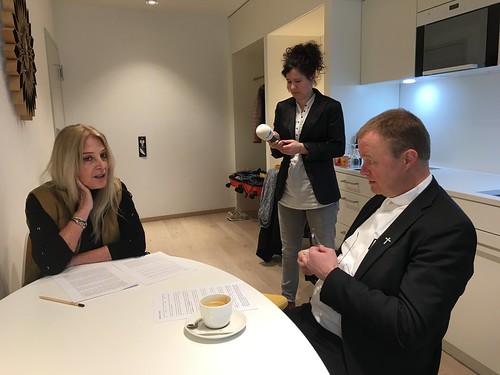 Interview with Father Thomas for the Swiss Radio Maria.

When the interview ended, we left immediately for the church of Saint Anthony where Vassula’s speech would take place.

Outside of the Church, there were tables with TLIG books in French and German language, Dvd’s, Cd’s, Vassula’s paintings. Entering the Church the melodious voices of the children’s choir lifted our hearts. About 25 children of the choir, aged 4 to 15 years old, along with their families, came from the Czech Republic to participate in this meeting! The big Church was almost full. In the first row were sitting seven priests. About 800 hundred people from all ages, especially young people, many young couples with their children attended Vassula’s inspired testimony. People came from Paris, Toulouse, Cologne, Berlin, and Czech Republic and of course from all over Switzerland. 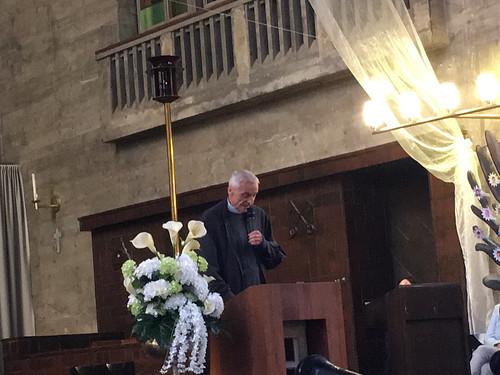 The meeting started with the prayer – song of Our Father in Aramaic. Then, Father Rolf Maria Reichle, introduced Vassula to the public. Vassula greeted the people and thanked them for having traveled from afar. She recognized many faces that she knew 25 years ago who were faithful readers of the Messages. “I feel like I am back home, when I come to Switzerland,” Vassula started by saying to the people attending,  “after all, part of my life was spent here, and also the Messages started to be known here in your country, Switzerland.” 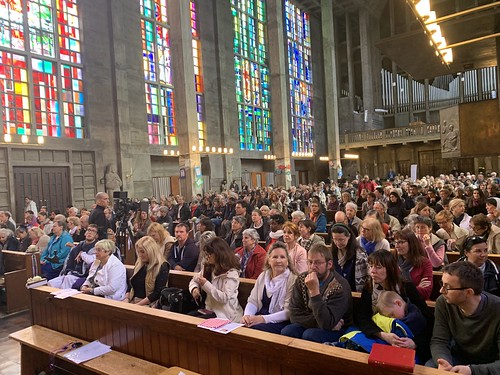 The Church of Saint Antony was almost full.

In her address to the people, Vassula, spoke about the Return of Christ, about the Signs of the Times, the warnings given by the Holy Trinity and Our Blessed Mother to the whole word in our days. She emphasized the Mercy of the Lord and the graces that God gives us during our era in order to revive us! having travelled around the world, untiringly, as an apostle of Christ, the trace that our Lord has traced for his chosen one, reminds us of what St. Paul has been saying in 2 Timothy 4: 6-8: “As for me, my life is already being poured away as a libation, and the time has come for me to be gone. I have fought the good fight to the end; I have run the race to the finish; I have kept the faith; all there is to come now is the crown of righteousness reserved for me, which the Lord, the righteous judge, will give to me on that Day; and not only to me but to all those who have longed for his Appearing; Yes, to all the laborers of True Life in God, who remained the faithful collaborators to work in His great Vineyard.

Vassula said: “God manifests itself in our time as never before in history, in an extraordinary way…  God is renewing His creation and doing all new things as a preparation for the Return of His Son Jesus Christ…  God approaches us to revive what is dead, to unite what is divided, to repair what is broken, to give hope where there is despair.” 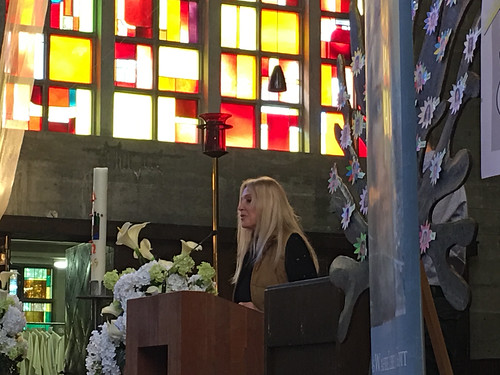 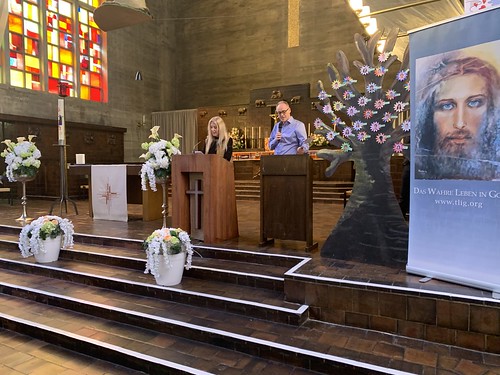 Vassula is giving her testimony. Herbert, translates into German. 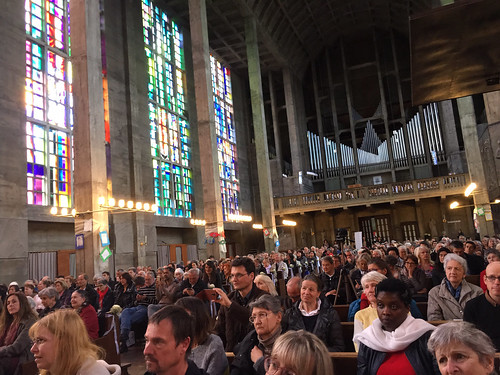 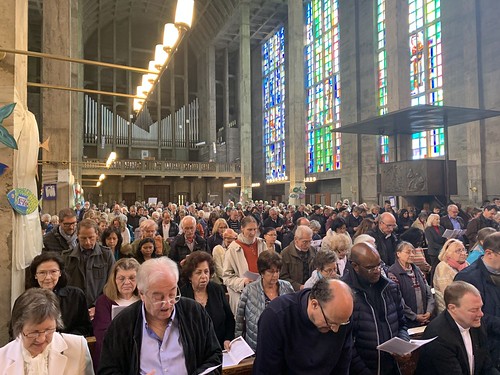 The participants say the prayer of Repentace and deliverance.

The theme of the great Apostasy of our Era, and how humanity has fallen away from God, corrupted and lacking faith, was expressed strongly in her speech and the sign that we are in a great Apostasy is of the selling of our Cathedrals. “if the world suffers and is in flames and afflicted by wars and misfortunes, it is because the world attracts all this evil by sin, by immorality, by pride, by defiling its soul. “

We know, she said, that in spite of our so despicable era, God’s Mercy is still shown on us, and God’s Grace has been revealed by His approach in this way, through His Messages. Were all the people of the world to open their spiritual ears to hear what God is saying to us today, salvation will be possible for the whole human race, because they will know that without God our table is empty but with Him our table is full, that God only needs our dying to one’s self and dying to our ambitions.

Vassula explained how the Lance’s Blade still lies in the Heart of Jesus. Jesus explained to her that the Blade of the Lance represents our division among the Churches. Many of the people while hearing Vassula’s testimony were cut to the heart, and their faces were wet with tears.

After a short break, followed by the announcements, the healing and deliverance prayer was prayed solemnly by everyone. Seven priests and Vassula were asked to go forward to pray over all the participants. People were waiting in order and quietly in long queues to come their turn. During the healing prayer, the children choir was singing. The presence of the Holy Spirit was powerfully manifested! Heaven was on earth for a while! 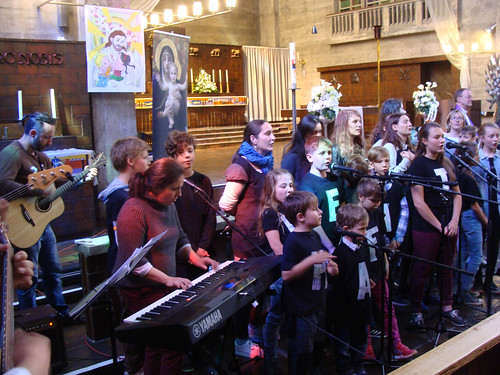 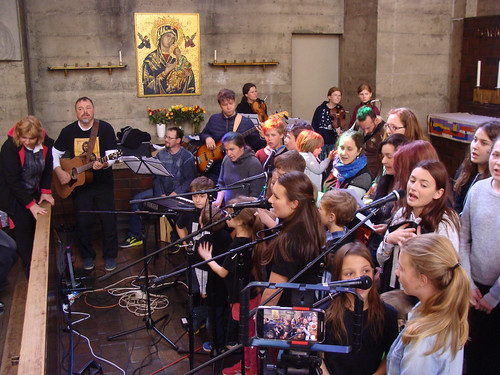 The Children Choir from Czech Republic. 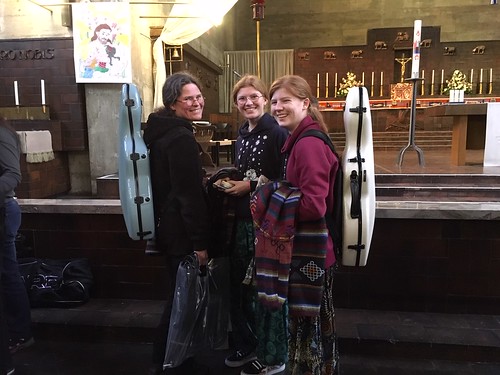 The violinists of the choir of Czech Republic

At the end of the meeting Vassula thanked the children’s choir and their families who traveled by cars from Czech Republic to Switzerland in order to participate and sing in her meeting. She also thanked the public for its attendance and attention and asked them to pray for her and her family.

Sunday May 12th, we spent the whole day together with the organizers in Mother’s Day, and we got to know each a lot more than before. Most of the time we were mesmerized listening to Vassula’s amazing spiritual experiences that she was having with Christ in the last thirty years’. We learned even more, of how God has an unlimited generosity, and of how His Words to Vassula were being accomplished, that He would be pouring out teaching like prophecy as a legacy to all future generations and that He intended to irrigate his flower beds. His Word to her and to us all will be like a rivulet, and from that rivulet it will widen into a river and from a river into an ocean, an ocean of love. We noticed, those who are readers of True Life in God, that indeed, we were being imbued, with Fountains of Living Water, coming from the Source of Life and how indeed discipline has shone on us… How wonderful is our God!

On Monday, May 13th, Ursula and Sonia drove us to Basel airport. We gave thanks to our Lord, for He is good and His Love is everlasting! Serving God is a joy for all of us, because the ones who serves God, feels that they have been invited to enter in the Courts of Yahweh, the King of kings, to serve Him.